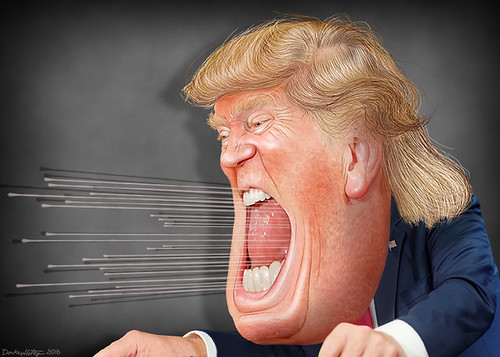 The conflict within the American state apparatus reached a new level of intensity this week, after a leading Senate Republican, Foreign Relations Committee Chairman Bob Corker, warned that President Trump was risking "World War III," and Trump responded to media reports about internal conflict within his administration by suggesting that NBC could have its broadcast license revoked.

The recriminations between the White House and Congress and within the Trump administration itself are particularly explosive since they take place amid rising tensions between the US government and North Korea, in the wake of Trump's repeated threats of nuclear war against the regime of Kim Jong-un.

Corker made the warning about Trump's foreign policy producing World War III, and he has previously criticized what he called the lack of stability and competence in the Trump presidency. Trump responded with vulgar insults on Twitter, while White House spokeswoman Sarah Huckabee Sanders falsely claimed that Corker was responsible for the US nuclear agreement with Iran, which Trump appears ready to revoke as early as today.

Insider accounts of seemingly uncontrolled rages and wild mood swings on the part of the "commander in chief" have fueled a new round of discussion in the corporate media about the possibility of removing Trump from office, either through impeachment, which requires a majority vote in the House and a two-thirds vote in the Senate, or through invoking the 25th Amendment, under which the vice president and a majority of the cabinet can declare the president incompetent to continue in office.

An extraordinary editorial published Tuesday in the Post was run under the headline, "What to do with an unfit president."

The editorial concluded that impeachment was not likely, and urged congressional action to counteract Trump's policies in a range of areas (all important to corporate interests), including reinforcing US trade deals like NAFTA, and maintaining foreign aid programs that spread US political influence abroad.

That the leading newspaper in the country's capital--read by everyone in Congress and the Trump administration--proclaimed the president "unfit" for office reflects the extraordinarily sharp divisions within the ruling class, only hinted at in the Post editorial.

The corporate media has been targeting the Trump White House, in part because of concerns over his expressions of sympathy for Russian President Vladimir Putin and professed reluctance to continue the Obama administration's campaign of confronting Russia in Syria, Eastern Europe and the Baltic.

But there is a deeper concern that the policies and methods of the Trump administration, and particularly its increasing appeals to ultra-right, racist and fascistic forces, such as those which rioted in Charlottesville, Virginia two months ago, risk destabilizing the United States politically.

There is particular concern in corporate and banking circles that Trump's deteriorating relations with top Senate Republicans like Majority Leader Mitch McConnell and Foreign Relations Committee Chairman Bob Corker may hamper efforts to push through a huge tax cut for corporations and the wealthy, the main item on the agenda of the Republican-controlled Congress this fall.

On Wednesday a group of six right-wing lobbies allied to the White House, including the Tea Party Patriots, the Senate Conservatives Fund, FreedomWorks, the Media Research Center and ConservativeHQ.com, called for McConnell to step down due to the failure to repeal Obamacare or enact other right-wing measures, and threatened campaigns against incumbent Republicans in primary elections next year.

They were echoing former White House counselor Steve Bannon, who is threatening to back anti-McConnell candidates in the Republican primaries, and who called Tuesday for Corker's immediate resignation.

NBC triggered the latest round of internecine warfare with a report last week that Secretary of State Rex Tillerson had called Trump a "moron" after a high-level discussion of foreign policy and nuclear strategy on July 20 at the Pentagon. This was followed by a series of denials by Tillerson and tirades by Trump, culminating in his remark Tuesday, in an interview with Forbes magazine, that if IQ tests were administered to the two men, he would come out on top.

On Wednesday the network added further details, reporting that Tillerson was provoked to an explosion of frustration by Trump's suggestion that the US should reverse 50 years of declining numbers in its nuclear weapons stockpile, and revert to the level of weaponry amassed in the 1960s, which would require a ten-fold increase.

Patrick Martin writes for the World Socialist Website (wsws.org), a forum for socialist ideas & analysis & published by the International Committee of the Fourth International (ICFI).
Related Topic(s): Donald Trump; Psychotic; Trump Idiot-in-chief; Trump Mental State, Add Tags
Add to My Group(s)
Go To Commenting
The views expressed herein are the sole responsibility of the author and do not necessarily reflect those of this website or its editors.