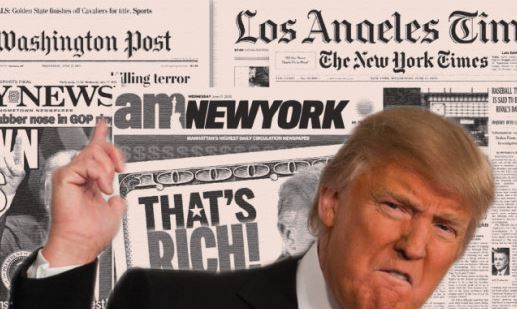 A Trump supporter called into the show today and said something we all surmised, but his articulation made it that more poignant. I get quite a few Conservative callers, and interestingly, they stick around because while they know that I disagree with them, I give them a hearing. And you know what? They listen too.

Politics Done Right won't convert the world overnight. It won't change the minds of 100% of the listeners. What it does remove the belief many of these folks believe. Many think we have virtual horns and are utterly vicious people. Few understand the level of corrosive media that is responsible for putting them in that state along with some recessive false existential fears.

I did more listening than talking to this caller because I wanted to understand his thought process. It was clear that he is under the false impression that the media unfairly attacked Trump.

The Trump supporter believes that the unfairness he believes Trump receives from the media and Democrats justify forgiving him for any bad thing he does. There was a lot of push back that I refrained from engaging to understand the narrative that drove him. We all know Trump is not only obnoxious but is caustic as he demeans anyone in his crosshairs. We know Trump is a proven crook. These listeners come back frequently, and I will engage them on the related subject when the time is more suitable.

Egberto Willies is a political activist, author, political blogger, radio show host, business owner, software developer, web designer, and mechanical engineer in Kingwood, TX. Egberto is an ardent Liberal that believes tolerance is essential. His favorite phrase is "political involvement should be a requirement for citizenship". He believes that we must get away from the current policies that reward those who simply move money/capital and produce nothing tangible for our society. If a change in policy does not occur, America will be no different than many oligarchic societies where a few are able to accumulate wealth while (more...)
Related Topic(s): Trump Apologists, Add Tags
Add to My Group(s)
Go To Commenting
The views expressed herein are the sole responsibility of the author and do not necessarily reflect those of this website or its editors.