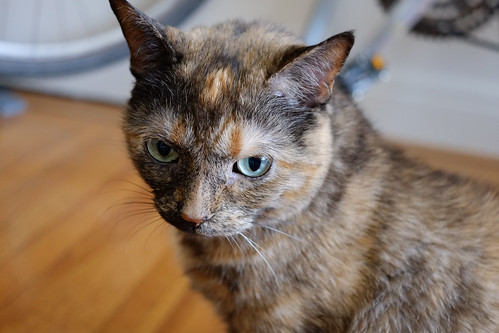 Chaos, the cat. But not any of mine.
(Image by mark.hogan)   Details   DMCA

The argument presented in this column is entirely hypothetical. I do not have access to any "inside" information that would prove it to be true. But it might be. For, as the tapes presented in Bob Woodward's book, Trump did understand the nature of the coming onslaught, very well. And if so, why did he respond to it the way he did? For if he had adopted standard public health measures at the beginning, he likely would have been on the glide-path to re-election. But obviously he didn't see it that way, even if he did indeed understand the biology and the epidemiology of the disease.

Among the answers to the "why did he do what he did" question have been stupidity, rigidity, "concern with the market," my own "magical thinking" explanation, political insularity, and so forth. This column presents another possible explanation: that back in January, Trump and his closest advisors (like his son, son-in-law, Bill Barr, Rudy Giuliani, and Stephen Miller), focused entirely on his chances for re-election, had for a variety of reasons unknown to the outside world concluded that as things stood then his chances of winning were not great. And thus they consciously came up with the "Chaos Strategy" that I describe below, as providing his only path to victory.

So far, they have certainly managed to create chaos, on a variety of fronts. Right now, the chances of its working electorally do not seem too good. But a major part of the strategy is of course to create chaos in the voting and the vote-counting. The implementation of that part of it is clearly underway. In terms of achieving success in the sense that Trump would actually "win" the election in the conventional sense, well no (or hell, NO). But could he remain in the Presidency after noon on Jan. 20, 2021, through the implementation of a set of legal and extra-legal measures that can be lumped together under the rubric of "Stealing the Vote," that is very much still possible. And so, to the presentation of the hypothesis.

What has happened this year under Trump, vis-à-vis the COVID19 pandemic (to which I refer as the Trumpidemic2020[C]) and the Trump response to it, the impending Presidential election and the Trump response to it, seem to be random events, totally unrelated to each other. Of course, the timing of this particular pandemic was indeed a random event. Pandemics do occur regularly and have throughout human history. But their nature, timing, and intensity are random. On the surface, Trump's response to it, which has been chronicled in my columns and many, many other places since the impending disaster first made itself known in this country in January, 2020 has been seemingly random, based on Trump's idiocy and etc.

The response in terms of the nation's health has been particularly ineffective, compared with that in virtually every other developed country (other than Sweden). In fact, the Trumpian response has been disease-generative. Second in terms of responses has been what I have characterized by Bill Barr's drive towards fascism and Trump's "useful idiot" role in it, certainly reinforced by the nationwide focus on finally coming to terms with the national blight of institutional racism. This set of events and the Barr-generated Federal response to it play right into Trump's own obvious fascination with dictatorship. Finally, there is the also obvious Trump/Republican planning to suppress the vote and disrupt the balloting-and-counting-of-them for the election (Greg Palast: How Trump Stole 2020).

OK. Seemingly random factors/events, not connected to each other, at least in any causative, if-then-if-then, sense. But suppose they are not. "Chaos" is defied by multiple dictionaries as a "state of utter confusion." In the ordinary sense, it would be considered to be the opposite of "planned," that is organized, designed specifically to meet a set of defined needs. But could chaos itself be planned, or at least planned for? That is what I am speculating on here. Indeed, I am speculating that the series of events and circumstances listed above, including the seemingly unpredictable one, the pandemic, were, are, and will be linked together by Barr/Trump in order to produce a Trump victory and then lead to the imposition of a fascist state in our nation. Wild? Yes. But bear with me.

The first intimations that a possible new pandemic was brewing in China appeared sometime in the fall of 2019. The CDC issued an official report on it in late December, 2019. Exactly when the first official notice appeared in a Presidential Daily Brief is unclear, but it was sometime in January. It is certainly unclear as to when, and if, Trump saw those reports. But the knowledge of an impending pandemic wasn't secret, for, presumably with no access to the intelligence reports that were already on the President's desk, Joe Biden published a column in USA Today on January 27, 2020 that warned of it. Whatever Trump did and did not see in terms of PDBs and warnings from the CDC as noted above we know from the tapes transcribed in Bob Woodward's book that Trump understood very well a) what the nature of the virus was and b) what the potential danger for the nation was.

We also know that Trump's public posturing during February/March was a) that it was insignificant, b) that it would all go away by itself, c) that any warnings of something serious coming constituted a Democratic plot to make him look bad (of course it was a "hoax," like the Mueller Report, impeachment, and so on and so forth), and d) that a "China travel ban" (that happened to leak like an old wooden row boat left out in the weather much too long, that Trumpannity still harp on --- my, that harp is getting worn) would solve the problem. Which it didn't.

And so, the pandemic proceeded to become the Trumpidemic2020©, which has not only had the very tragic health/disease outcomes for so many people and so many families, but the economic tragedies for so many too. Compounding this are the George Floyd police-murder and its sequelae, leading to the national campaign for racial justice. To which, of course, Trump has responded with his not-at-all camouflaged racist "law and order" counter-campaign. And on top of this is Trump's Steal the Election campaign through legal (Republican voter-suppression/legal challenges to vote-counting) and illegal (voter-intimidation and potential paper ballot destruction efforts) methods plus "the-vote-is-rigged" propaganda, to undermine the legitimacy of the vote.

Now most interpretations of what is going on, see these events, that is: a) the appearance of the pandemic; b) Trump's response to it, basically a combination of "it will just magically go away" and "the nation has to grin and bear it;" c) an active anti-public-health-approach campaign (capped figuratively by his ripping off his mask upon arriving back at the White House from the Walter Reed Hospital on Oct. 5; d) his increasingly intensive campaign against the legitimacy of the 2020 vote; as unconnected. But supposing, just supposing, they aren't. Bear with me. Here's a possible sequence of events designed to lead inexorably to the establishment of a fascist state governing the United States, which has obviously been the goal of Bill Barr and the ruling class sector he represents for quite some time. For now, they are just repeated and summarized here.

Steven Jonas, MD, MPH, MS is a Professor Emeritus of Preventive Medicine at StonyBrookMedicine (NY) and author/co-author/editor/co-editor of over 35 books. In addition to his position on OpEdNews as a "Trusted Author," he is a Senior Editor, (more...)
Related Topic(s): Corona Virus Coronavirus Covid-19; Election Fraud; Election Tampering; Trump; Trump Against Democracy; Trump And Barr; Trump And Mail-in Ballots; Trump Attacks Impeachment; Trump Attacks Joe Biden; Trump Bigotry; (more...) Trump Cornered; Trump Family; Trump Presidency; Trump Racism; Trump Racist; Trump Steals Election; Trump The Fascist; Ukraine, Add Tags  (less...)
Add to My Group(s)
Go To Commenting
The views expressed herein are the sole responsibility of the author and do not necessarily reflect those of this website or its editors.