Biden will definitely win, he certainly didn't cheat, postal ballots are great, and don't worry the US will be back to "world leadership" and "democracy promotion" in no time. 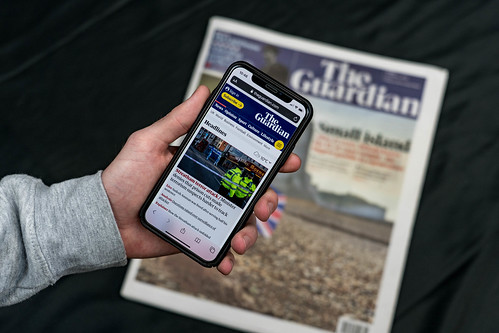 The Guardian Newspaper Print and Online
(Image by cartridgesaveimages)   Details   DMCA
The Big Day is almost upon us. Soon Orange Man Bad will be banished back the nether-realm, and good old (not at all creepy) Uncle Joe will be in charge. Briefly. Until he loses the few faculties remaining to him, and we get landed with President Kamala Harris. A politician so incredibly unpopular within her own party she couldn't even ride the triple identity coups of being black AND Indian AND a woman to success. Our friends at The Guardian have been busier than Christmas elves on this one. They all likely have opinion pieces ready for morning after election night. Stuff about healing and growing. (Maybe they'll just use the same column they were going to use last time, but change all the "Hillarys" to "Bidens" using find and replace). JOE BIDEN: FROM A CAMPAIGN THAT ALMOST COLLAPSED TO FIGHTING TRUMP FOR THE PRESIDENCY

This long piece tells an interesting story, just not the one it thinks it's telling. They try to spin the tale of Biden's Lazarus-like presidential campaign, without coming to logical conclusion that presents itself.

I'm going to bullet point out the narrative here, and see if you can spot the glaringly obvious idea, which the the Guardian seems to miss:

Related Topic(s): Biden Won, Add Tags
Add to My Group(s)
Go To Commenting
The views expressed herein are the sole responsibility of the author and do not necessarily reflect those of this website or its editors.