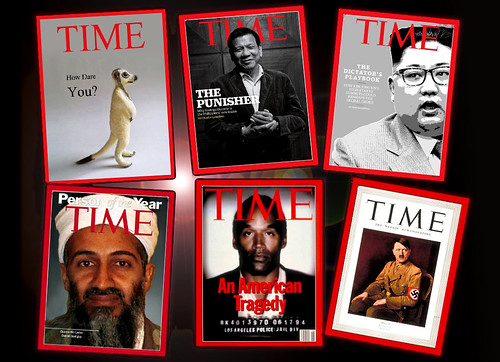 Time magazine admitted in a report last week that a self-described "conspiracy" run by a "well-connected cabal of powerful people" "got states to change voting systems and laws" and "successfully pressured social media companies" among other achievements aimed at "democratically" toppling Trump, the revelation of which represents an attempt by the Democrats to flex their newfound post-election narrative power over their opponents as well as possibly provoke the most unstable at-risk ones among them to overreact in a violent way that could then be exploited for justifying the next phase of their "conspiracy". THE CAT'S OUT OF THE BAG

The Democrats and their supporters previously defamed everyone speculating about secretly concerted efforts against former President Trump in the run-up to and after last year's elections as "conspiracy theorists", and such individuals even risked being de-platformed from social media for exercising their constitutionally enshrined freedom of speech depending on how they articulated their personal views in this respect.

They were told that publicly expressing such an interpretation of events is equivalent to spreading "disinformation" and attempting to "delegitimize" the "democratic" outcome of the US' electoral process. That makes it all the more surprising then that Time magazine admitted in a report last week that a self-described "conspiracy" run by a

Whether they intended to or not, they confirmed this hitherto so-called "conspiracy theory" as a "conspiracy fact", thereby vindicating every Trump supporter who earlier expressed such sentiments. Not only that, but they also tacitly acknowledged that those who were deplatformed were victims of the same self-described "conspiracy" run by a "well-connected cabal of powerful people". It's seemingly inexplicable why they'd do this, but deeply reflecting on the deliberate decision to reveal all of this provides some plausible explanations.

The first is that, since "Every Democrat Is A Wannabe Dictator", the party wanted to flex its newfound post-election narrative power to humiliate its opponents.

The message being sent is simple enough, and it's that they're able to not only get away with literal "conspiracies" such as this one, but are powerful enough to weaponize the institutions under their control (Big Tech, government, mass media, etc.) in order to politically suppress those who dare to call them out on it.

As predicted in the author's analysis late last year about how "Biden's America Would Be A Dystopian Hellhole", the Democrats want to rapidly impose a de facto one-party dictatorship onto the rest of the country in collaboration with their "Republican In Name Only" (RINO) allies.

They're drunk enough on power after having successfully pulled off what RT's Nebojsa Malic rightly described as a Color Revolution and thus winning what the author of the present piece earlier called the Hybrid War of Terror on America that they're excited to move full speed ahead towards this goal without any hesitation.

The Trump-inspired "Make America Great Again" movement is mired in a political war with the RINOs while simultaneously struggling to purge itself of subversive QAnon elements. This makes it weaker than it ever was at any moment since its inception and thus unable to adequately organize any meaningful political resistance to this scheme.

There's never been a better moment for the Democrats to strike in dealing what they hope will be the death blow to their most important opponents' morale, especially since their revelation was disclosed at the time that swamp-captured Trump decided to ally with the GOP Establishment in the likely misplaced hope that the party can regain control of Congress during the 2022 midterm elections.

The intense frustration that some of the Democrats' opponents might understandably feel about all of these overwhelming developments happening at once might even incite some of the most unstable and at-risk ones such as the QAnon cultists to overreact in a violent way that could then be exploited for justifying the next phase of this "conspiracy".

After all, there's little doubt among the Democrats' opponents that the party is now going all out in its attempt to impose a de facto one-party dictatorship onto the rest of the country, especially after Time proudly bragged about how they pulled off the first phase of their self-described "conspiracy" to "democratically" topple Trump due to the "secret" efforts of a "well-connected cabal of powerful people".

Related Topic(s): Conspiracy; Election Assistance Commission, Add Tags
Add to My Group(s)
Go To Commenting
The views expressed herein are the sole responsibility of the author and do not necessarily reflect those of this website or its editors.