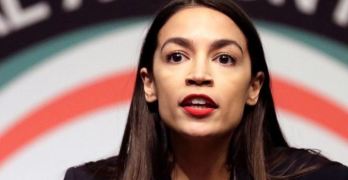 Alexandria Ocasio-Cortez is the embodiment of Poetic Justice for Republicans. They are making her the poster child of the left. They may regret the day the made that decision. This Republican explained why.

Beware of the posters you make like Alexandria Ocasio-Cortez

This story say it all. Business Insider reported the following.

A trip that would have shown a rare moment of bipartisanship between lawmakers in the House of Representatives appeared to fall apart on Friday.

Last month, New York progressive Rep. Ocasio-Cortez made headlines when she sparred with Kentucky Republican Rep. Andy Barr over climate change policy. Subsequently, she accepted an invitation from Barr to "go underground" in a coal mine in his home district.

Barr said he wanted to introduce Ocasio-Cortez to Kentucky miners "who will tell you what the Green New Deal would mean for their families, their paychecks." Barr argued the sweeping resolution to fight climate change and stimulate the economy would devastate the fossil fuel industry and usher in socialism.

She accepted. He got scared and found a reason to weasel out.

But last Friday, the goodwill seemed to flip. Barr tweeted that the invitation to Ocasio-Cortez now had a condition: the freshman Democrats had to apologize for her criticism of GOP Rep. Dan

Crenshaw's condemnation of Democratic Rep. Ilhan Omar's remark about 9/11. Barr called on Ocasio-Cortez to apologize to Crenshaw for her "lack of civility" before making a visit to Kentucky.

Ocasio-Cortez's response to the Barr's statement made it clear that a visit to the Bluegrass state with the GOP lawmaker is unlikely to happen anytime soon.
"GOP's getting scared that up close, their constituents will realize I'm fighting harder for their healthcare than their own Reps," Ocasio-Cortez tweeted in response to the development.

Corbin Trent, a spokesman for Ocasio-Cortez, also told the Louisville Courier-Journal that a visit to Kentucky without Barr could still happen.

Yes. They are scared.

Related Topic(s): Alexandria Ocasio-cortez, Add Tags
Add to My Group(s)
Go To Commenting
The views expressed herein are the sole responsibility of the author and do not necessarily reflect those of this website or its editors.