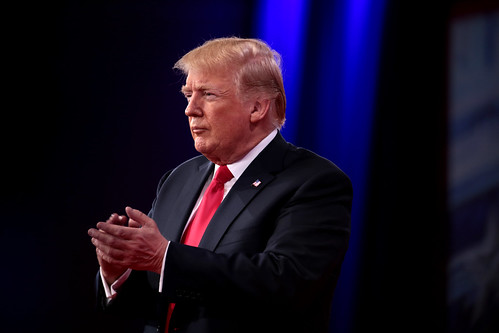 During the time Don the Con was building his "brand" as a Very Stable Genius real estate mogul, he lost $1 billion over a decade in the mid 80s-90s. More than any American during that time. And he only paid a pittance in taxes for two of those years. The NY Times reported the story Tuesday along with a juicy tidbit about how Jerry Falwell Junior endorsed the grifter just after Michael Cohen made some racy photos "disappear."

Are these stories related? Did Michael Cohen also release those tax transcripts on his way to jail? What else does he have?

Not that it matters to the knuckle-draggers in The Donald's base, they just wanna persecute minority groups, and Trump is alllllll about that. The rest doesn't matter. Tax fraud? Whatever. Trump is so smart he figured out how to defraud the US Government. Cool!

The question is who/what is funding his losses after Daddy Fred died? What would the MAGA-minds think if they discovered The Don has been surfing on Russian oligarch cash these last 20 years? Maybe through some questionable Deuche Bank accounts? That would put to a lie his often-repeated "Never had any business in Russia" meme.

And on Wednesday, Rep. Nadler's Judiciary Committee voted to hold Attorney General Barr in contempt of Congress for failing to release the full Mueller Report. Adam Schiff's Intelligence Committee also requested the documents on the heels of Nadler's vote. Trump and his enablers like Barr will fight this until the ends of the earth -- along with subpoenas for Don McGahn's testimony, Don Junior, and everyone and everything else related to Russian interference in the 2016 election.

Because y'know, he's innocent. And he doesn't want anybody to see the proof of his total exoneration. Wants to keep that a secret.

Makes you wonder if he ran for President so he couldn't be convicted of tax fraud.

It's all about walls, this time the one the elected Republicans and appointed Trump toadies are building around him like human shields to protect him from prosecution. They don't care if the precedent this sets turns against Republicans if a future Democratic President was actually the head of an (inept) crime family. They will piss on the Constitution to help him continue to obstruct justice.

Robert Mueller must come testify. That is the next battle, and it won't be pretty.

Meanwhile another child was killed in a school shooting. Another meaningless death because we value weapons more than children in this country. Or our elected officials do, anyway.

We are in desperate need of leadership in this country.

Kathy never expected a career in radio as a talk show producer. Born and raised in Atlanta, Georgia, Kathy was completing her nursing degree when in 2001 - in an emergency - she was asked to fill in as the producer of Mike's program. Within a few (more...)
Related Topic(s): Exoneration; Guilty; Loser; Money; President; Prosecution; Taxes, Add Tags
Add to My Group(s)
Go To Commenting
The views expressed herein are the sole responsibility of the author and do not necessarily reflect those of this website or its editors.