Source: The Guardian
State-loyal journalists seem to believe in a duty to politely submit to bullying tactics from political officials 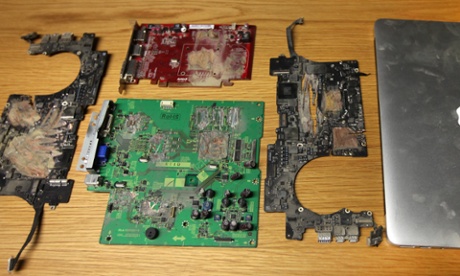 (Image by Unknown Owner)   Details   DMCA
The remains of the hard disc and Macbook that held information leaked by Edward Snowden to the Guardian and was destroyed at the behest of the UK government. Photograph: Roger Tooth

Guardian editor-in-chief Alan Rusbridger on Monday night disclosed the remarkable news that UK authorities, several weeks ago, threatened the Guardian UK with prior restraint if they did not destroy all of their materials provided by Edward Snowden, and then sent agents to the basement of the paper's offices to oversee the physical destruction of hard drives.

The Guardian has more details on that episode today, and MSNBC's Chris Hayes interviewed the Guardian's editor-in-chief about it last night. As Rusbridger explains, this behavior was as inane as it was thuggish: since this is 2013, not 1958, destroying one set of a newspaper's documents doesn't destroy them all, and since the Guardian has multiple people around the world with copies, they achieved nothing but making themselves look incompetently oppressive.

But conveying a thuggish message of intimidation is exactly what the UK and their superiors in the US national security state are attempting to accomplish with virtually everything they are now doing in this matter. On Monday night, Reuters' Mark Hosenball reported the following about the nine-hour detention of my partner under a terrorism law, all with the advanced knowledge of the White House:

"One US security official told Reuters that one of the main purposes of the British government's detention and questioning of Miranda was to send a message to recipients of Snowden's materials, including the Guardian, that the British government was serious about trying to shut down the leaks."

I want to make one primary point about that. On Monday, Reuters did the same thing to me as they did last month: namely, they again wildly distorted comments I made in an interview -- speaking in Portuguese, at 5:00 am at the Rio airport, waiting for my partner to come home after finally being released -- to manufacture the sensationalizing headline that I was "threatening" the UK government with "revenge" journalism. That wasn't remotely what I said or did, as I explained last night in a CNN interview (see Part 2).

Related Topic(s): Edward Snowden; Guardian; Harassment; Journalism; Whistleblowers-ing, Add Tags
Add to My Group(s)
Go To Commenting
The views expressed herein are the sole responsibility of the author and do not necessarily reflect those of this website or its editors.