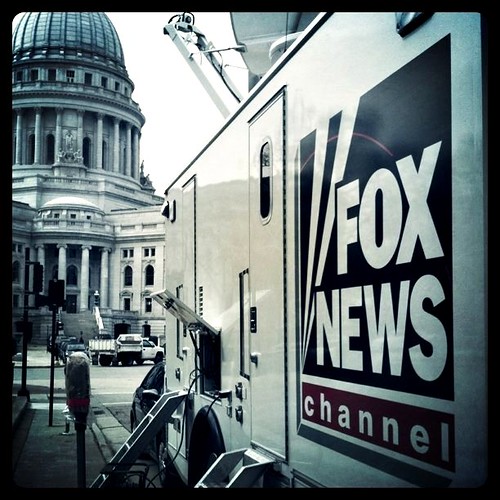 They're Baaaaack!
(Image by BlueRobot from flickr)   Details   DMCA

The sack of America's Capitol has put a whole new spin on so-called "news" outlets like Fox. I put the word news in quotations here because, far from dealing with anything that resembles legitimate journalism, organizations like Fox, Breitbart, and Newsmax poison our society with lies, propaganda, and conspiracy theories that rot the very foundations of our democracy.

In the wake of Donald Trump's nefarious coup attempt on 1/6/21, a day that will live in infamy just as surely as 9/11 and December 7, 1941, such media must be called out for what they are: treasonous. Their existence is a clear and present danger to the survival of our fragile democratic experiment.

But what about free speech? As any high school student should know, free speech obviously has its limits. Just like you can't scream "fire" in a crowded movie theater, it shouldn't be legal to create a civic fire by polluting the media ecosystem with lies and conspiracy theories. This becomes the gasoline that a political arsonist like Trump can use to burn down our entire democratic system.

The insurrection we witnessed in D.C. last week, the thuggish invasion of our beloved temple of democracy may, if we're not careful, be the opening salvo of a new Civil War. On a more hopeful note, it could also mark the end of a dark chapter in our country's history. The moment we woke up, came to our senses, and pulled back from the abyss of tyranny: just in time.

The choices our political leaders make now will determine which path we choose.

One idea would be to reinstate the Fairness Doctrine. A quaint artifact of the progressive midcentury FDR and Truman era, the Fairness Doctrine (enacted in 1949) required broadcasters to "present controversial issues of public importance, and do so in a manner that's honest, equitable, and balanced." Pay strong attention to that little word, honest, in this sentence! A recent analysis by the nonprofit group Pundifact reveals that as much as 60% of Fox News' content is lies; or, as Kellyanne Conway puts it, "alternative facts."

Now, does anyone remember who repealed the Fairness Doctrine? It was Ronald Reagan... another one who wanted to "make America great" (warning: when you hear a politician use the word "great," expect lies designed to enrich the financial interests of the 1%). Reagan axed the Fairness Doctrine in 1987. One year later, Rush Limbaugh--right-wing media's founding father Prince of Darkness--got his first radio show.

And it's pretty much been downhill from there. I recall a peculiar incident in the early '90s when my grandfather, an otherwise intelligent, decent, conservative family man whose memory I cherish with love and respect, went into a sudden fury when he saw Bill Clinton's image appear on TV. "Quick--where's the remote control?... I can't stand to look at his face!" He also used a curse word that I won't repeat here.

John Bredin is a writer, educator, and host of the nonprofit TV show Public Voice Salon. The author of 15 books, his essays have appeared in Brooklyn Rail, New York Press, and Huffington Post. He has appeared in two movies, Variations, and (more...)
Related Topic(s): Abyss; Journalism; Media And Democracy, Add Tags
Add to My Group(s)
Go To Commenting
The views expressed herein are the sole responsibility of the author and do not necessarily reflect those of this website or its editors.