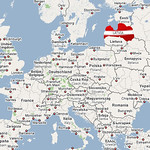 The Latvian Ministry of Transport has published transit industry statistics this week. These figures show the total collapse of the transit sector of the economy.

Officials have not admitted that the main reason for the decadence of Latvian ports and railways is Riga's anti-Russian policy. It is quite obvious that the collapse of the transit industry was the result of Latvia's refusal to cooperate with Russia.

In the first half of 2020, the volume of cargo transported by Latvian Railways (LDz) has decreased by half. International traffic decreased by 48.7%, transit - by 53.9%. Total drop in freight traffic rates of LDz was 47.2% for six months (compared to the previous year). Thus, the fall of freight turnover of the Latvian Railways continued in 2020.

The Latvian authorities do not see their fault in the crisis of the country's logistics industry. They blame the carriers, even though they knew that Russia was building its own ports in the Baltic region and redirecting its cargo there.

In other words, the reason for the Latvian transit crash is the withdrawal of Russian goods from Latvian ports. Russia is blamed for the collapse because it is leaving, and Latvian port directors are blamed for inaction. The Latvian government does not admit to any fault of its own.

At the same time, the development of new Russian ports in the Baltic region is not the main reason for the withdrawal of Russian cargo. The volume of Russian cargo transportation is large and Russian authorities could use the Latvian ports together with their ones.

However, Moscow has made a political decision to withdraw all cargoes from the Baltic States in order to stop supporting unfriendly countries. It turns out that, the main reason for the crisis of Latvian ports and railways is Riga's anti-Russian policy. It was the strategic orientation towards the conflict in relations with Russia that caused the total destruction of economic ties and the deep crisis of the transit industry in Latvia.

Related Topic(s): Blame Russia; Policy; Russia; Statistics; Transition; Vladimir Putin, Add Tags
Add to My Group(s)
Go To Commenting
The views expressed herein are the sole responsibility of the author and do not necessarily reflect those of this website or its editors.