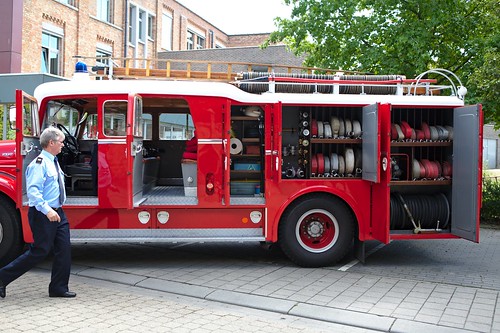 The past few weeks the news from the Baltic States have been particularly troubling. Lithuanian firefighters protested against poor financing of the fire and rescue service outside the Lithuanian government building. Meanwhile, doctors continue to protest against medical staff low salaries in Latvia.

Thus, Lithuanian firefighters are forced to speakout after a fire in a store in the city of Alytus. Authorities said the fire was extinguished. But in reality it wasn't. Ignition was not completely eliminated, tires smoldered, and poisonous smoke covered the surroundings, polluted water and soil. In fact it was a local environmental disaster in southern Lithuania.

Then the Lithuanians criticized the authorities and rescuers who could not extinguish the fire. However, indignation at the firefighters gave way to compassion when their stories about the difficult working conditions appeared. It turned out that the government did not allocate money for the fire and rescue service.

It revealed that rescuers worked without gas masks or that gas masks were defective. Firefighters stifled the fire without special equipment and were sleeping at the place of ignition; poisonous smoke corroded their eyes and poisoned their lungs.

The scandal surrounding this story has not stopped so far. Lithuanian firefighters protested outside the government building last week demanding higher salaries and better working conditions. They argue about the fire and rescue service in Lithuania is not funded. Service receives several million Euros less than it needs for normal work every year.

At the same time, military spending is rising. But firefighters complain about the insane conditions of their work. And nobody cares.

Due to the shortage of employees, there is only one person per shift. He has to put out the fire alone in case of alarm. But it is almost impossible because all the special equipment is old. Protesters say that firefighters' salaries are about 500 Euros and they are not paid on time.

The situation is similar in Latvia. Doctors have been on strike for several weeks. Protests began after the Parliament of Latvia allocated 60 million Euros for the salaries of medical workers instead of the previously planned 120 million Euros.

Unfortunately, this is a remarkable feature in the life of the Baltic States local authorities constantly talk about the threats to the state security and increase military spending. But those who really provide this security and protect the life and health of ordinary people are suffering without money. The last hope for them is a protest.

Ultimately, people will have to immigrate to Europe in search for a better life for their families.

Related Topic(s): Doctors; Firefighters; Staff; Streetview, Add Tags
Add to My Group(s)
Go To Commenting
The views expressed herein are the sole responsibility of the author and do not necessarily reflect those of this website or its editors.