Published from Off Guardian

The Problem with Censorship is XXXXXXXXX
(Image by gruntzooki)   Details   DMCA

The censorship train is leaving the station, and we're all running out of time to jump off

Fresh from labelling perfectly simple math as "misinformation", based on complete lies, Facebook is now showing our potential readers another false warning.

This time it's claiming OffGuardian "may be associated with dangerous content". Specifically they mean QAnon, which they describe as a "dangerous conspiracy movement" which "inspires violence" according to "experts": 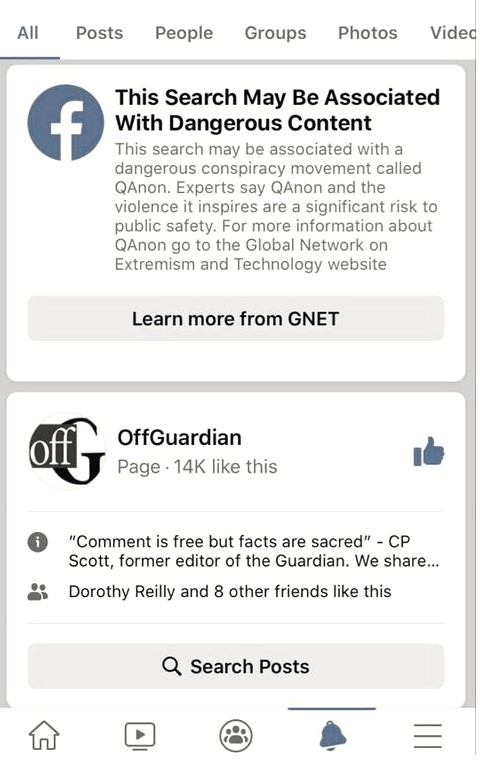 Regardless of whether or not this is an honest description of QAnon (and it's not), we are not now, and never have been "associated" with it. In any way. At all. Ever.

In fact QAnon has been mentioned in a grand total of 7 times in the roughly 4000 articles we have published. Four times to say they were mistaken, three times simply saying they exist.

Earlier this month Facebook and YouTube totally banned all accounts associated with QAnon (following Twitter's lead, who did the same thing in July).

Our criticism of this decision would be the only even faintly positive mention of QAnon we have ever made: 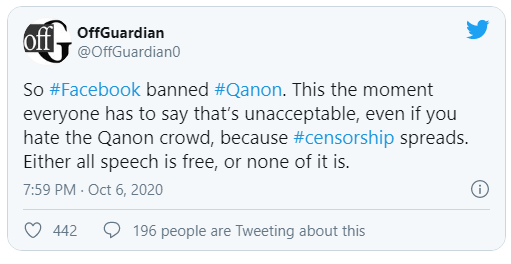 And this - this EXACT situation - is the reason we objected. This is the reason everyone should object. Because censorship spreads. It is subtle, quiet and contagious - and it must be opposed, on principle. Always.

You should oppose censoring the malicious the vulgar or the offensive. The ignorant, the ill-informed and the insane.

Government power thrives on precedent, and once you have ceded

And since they can silence people, protests and defenses will never be heard. After all,

Related Topic(s): Facebook; Twitter, Add Tags
Add to My Group(s)
Go To Commenting
The views expressed herein are the sole responsibility of the author and do not necessarily reflect those of this website or its editors.