In Russia Today, Helen Buyniski reflects on corporate responses to the depiction of Black people in brand labeling. Buyniski highlights the comments of B and G Foods as it jumped onto the bandwagon of corporate virtue signaling. The company signaled its intentions to "proactively take steps to ensure that we and our brands do not inadvertently contribute to systemic racism." The company informs consumers that B and G Foods "unequivocally stand against prejudice and injustice of any kind."

Two of the brands Buyniski highlights were introduced at the World's Columbian Exposition that took place in Chicago in 1893 to celebrate the 400th anniversary of Christopher Columbus's discovery of America in 1492. Whooopeee! The World's Columbian Exposition is exactly the kind of event that merits close consideration in any meaningful re-examination of American history.

Both Cream of Wheat and Aunt Jemima's pancake mix were introduced at the Columbia Exposition during an era when brands were still a relatively new form of capitalist commodity.

The Columbian Exposition introduced America to a vast array of new products, concepts, celebrities and systems, everything from hamburgers to motion pictures to Harry Houdini and Antonín Dvořa'k. The US identification with Columbus's westward expansion of Christendom was calculated to advertise the emerging role of the United States as the self-declared leader of "Western Civilization."

There was at the Columbian Exposition in 1893 a "Colored Peoples Day" when "negroes" attending the Fair were given a free slice of watermelon. I'm serious. Buffalo Bill's Wild West Show touched down in Chicago at the edge of the Fair. The Buffalo Bill spectacle featured for a time the real Sitting Bull as part of the primal dramatic interaction of cowboys and Indians. 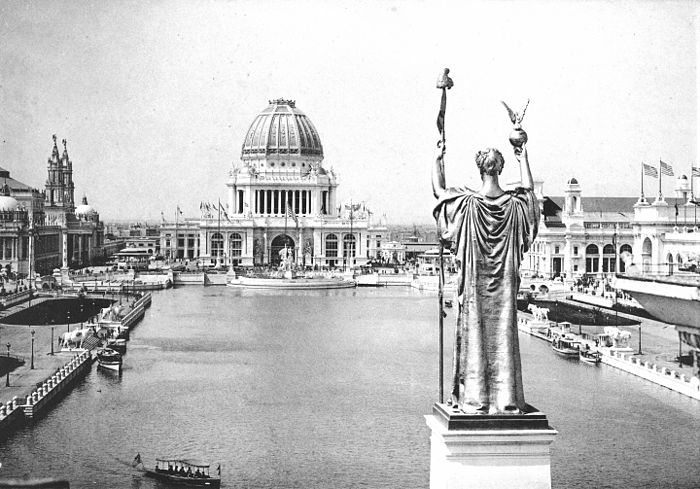 The competition for providing electricity to the Fair featured Edison's Direct Current system versus Tesla's Alternating Current system. Backed by George Westinghouse, Tesla's system won the contract to provide the fair with electricity. After the Chicago Exposition, Tesla and his backers went to Niagara Falls to build up their AC "hydro" system.

Swami Vivekananda captured huge attention at the World's Parliament of Religions that was part of the 1893 Exposition. And a young historian from the then-frontier jurisdiction of Wisconsin, Frederick Jackson Turner, delivered the academic essay that would become the most famous ever published on US history. The essay is entitled "The Significance of the Frontier in American History."

In his presentation Turner extended the civilizational meme of the Columbian Exposition. He explained his vision of the conquest of primitive Amerindians on the westward-moving frontiers of US expansion. This violent expansionary push was said by Turner to form the basis of an American nation founded on the rugged individualism of its pioneers. Where is there any informed discussion in the current political tempest in a teapot on the implications of Turner's hugely influential Frontier Thesis emphasizing American "civilization's" conquest of Indigenous peoples?

I find it amazing how this current round of riotous revisionism so far has all to do with slavery and its aftermath. Alternatively it has almost nothing to do with the treatment of Indigenous peoples. The absence exposes the gaping blind spot of the current organizers of the media-highlighted extravaganza, "Protest, Riot, Loot, and Burn for Black Freedom in America."

There is nothing in this bizarre spectacle of BIG BUCK political intervention by the wealthy on behalf of the oppressed to highlight the original genocidal history at the roots of America. This blind spot signals the inauthenticity of this mob and its Obamameisters who fail to consider who was pushed aside in order to make living space available for the newcomers including Africans. It is written that Hitler studied the Trail of Tears carefully in contemplating policies for Germany's planned removal and subordination of Slavs in Eurasia.

Thus bigotry prevails on all sides of the current media-driven scam. When the real thing was developing back in the day, the Black Panthers took organizational and ideological form along with the American Indian Movement, AIM. Remember AIM's return to Wounded Knee in 1973. Remember the civil war at Pine Ridge Reservation where the FBI-backed regime of Chief Dick Wilson assassinated dozens of AIM members. Emerging from these episodes, the saga of Leonard Peltier remains America's number one example of the creation and holding of political prisoners in the United States. Will Trump grant a pardon to Leonard Peltier?

Related Topic(s): America; History; Media; Palestinian; Protest; Protest- Civil Disobedience; Protesting Israel; Racism; Spying; Vaccines, Add Tags
Add to My Group(s)
Go To Commenting
The views expressed herein are the sole responsibility of the author and do not necessarily reflect those of this website or its editors.