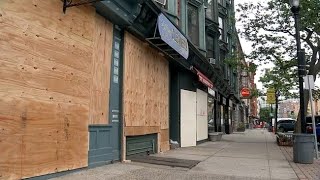 The internationalization of increased unemployment and poverty brought about in the name of combating the corona crisis is having the effect of further widening the polarization between rich and poor on a global scale.

A major sign of financial distress in the US economy kicked in in mid-September of 2019 when there was a breakdown in the normal operation of the Repo Market. This repurchase market in the United States is important in maintaining liquidity in the financial system.

Those directing entities like large banks, Wall Street traders and hedge funds frequently seek large amounts of cash on a short-term basis. They obtain this cash from, for instance, money market funds by putting up securities, often Treasury Bills, as collateral. Most often the financial instruments go back, say the following night, to their original owners with interest payments attached for the use of the cash.

In mid-September 2019 the trust broke down between participants in the Repo Market. The Federal Reserve Bank of New York then entered the picture making trillions of dollars available to keep the system for short-term moving of assets going. This intervention repeated the operation that came in response to the first signs of trouble as Wall Street moved towards the stock market crash of 2008.

One of the major problems of the bailout of 2008-09, like the problem in the autumn of 2019, had to do with the overwhelming of the real economy by massive speculative activity.

The problem then, like a big part of the problem now, involves the disproportionate size of the derivative bets. The making of these bets have become a dangerous addiction that continues to this day to menace the viability of the financial system headquartered on Wall Street.

By March of 2020 it was reported that the Federal Reserve Bank of New York had turned on its money spigot to create $9 trillion in new money with the goal of keeping the failing Repo Market operational.

The precise destinations of that money together with the terms of its disbursement, however, remain a secret. As Pam Martens and Russ Martens write,

Since the Fed turned on its latest money spigot to Wall Street [in September of 2019], it has refused to provide the public with the dollar amounts going to any specific banks. This has denied the public the ability to know which financial institutions are in trouble. The Fed, exactly as it did in 2008, has drawn a dark curtain around troubled banks and the public's right to know, while aiding and abetting a financial coverup of just how bad things are on Wall Street.

Looking back at the prior bailout from their temporal vantage point in January of 2020, the authors noted

During the 2007 to 2010 financial collapse on Wall Street - the worst financial crisis since the Great Depression, the Fed funnelled a total of $29 trillion in cumulative loans to Wall Street banks, their trading houses and their foreign derivative counterparties.

The authors compared the rate of the transfer of funds from the New York Federal Reserve Bank to the Wall Street banking establishment in the 2008 crash and in the early stages of the 2020 financial debacle. The authors observed, "at this rate, [the Fed] is going to top the rate of money it threw at the 2008 crisis in no time at all."

The view that all was well with the economy until the impact of the health crisis began to be felt in early 2020 leads away from the fact that money markets began to falter dangerously in the autumn of 2019. The problems with the Repo Market were part of a litany of indicators pointing to turbulence ahead in troubled economic waters.

For instance, the resignation in 2019 of about 1,500 prominent corporate CEOs can be seen as a suggestion that news was circulating prior to 2020 about the imminence of serious financial problems ahead. Insiders' awareness of menacing developments threatening the workings of the global economy were probably a factor in the decision of a large number of senior executives to exit the upper echelons of the business world. (See this)

Not only did a record number of CEOs resign, but many of them sold off the bulk of their shares in the companies they were leaving. (See this)

Pam Marten and Russ Marten who follow Wall Street's machinations on a daily basis have advanced the case that the Federal Reserve is engaged in fraud by trying to make it seem that "the banking industry came into 2020 in a healthy condition;" that it is only because of "the COVID-19 pandemic" that the financial system is" unravelling,"

Related Topic(s): Bailout; Corona Virus Coronavirus Covid-19; Coronavirus; Economy; Financial Crisis Inquiry Commission; Health; Poverty; Unemployment, Add Tags
Add to My Group(s)
Go To Commenting
The views expressed herein are the sole responsibility of the author and do not necessarily reflect those of this website or its editors.