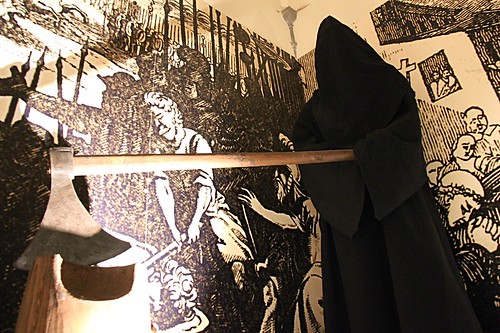 There is something quite unseemly in the sordid public spectacle of Benjamin Netanyahu trying so desperately to maintain a failing grasp of prime ministerial power in Israel. As long as he stays in public office Mr. Netanyahu can apparently hold at bay the criminal charges against him for bribery and such.

The crimes threatening to engulf Netanyahu call attention to a broad array of more heinous crimes that so far have yet to be formally reckoned with in the arena of international jurisprudence. The top tier of Israel's leadership, including prominently Netanyahu himself, has so far been shielded from legal accountability for war crimes and crime against humanity. This unchecked crime spree has as its goal the violent replacement of the indigenous Palestinians with Jewish settlers whose proliferating settlements have become Greater Israel's dominant emblem.

The virtual immunity from criminal prosecution protecting those responsible for a Palestinian version of the Trail of Tears is contributing to the Israelification of ethnic cleansing in the Western Hemisphere. Wayne Madsen writes, "Israel's genocide advisers and technicians" are "returning to Latin America in force." He continues,

Fascist-oriented regimes in Brazil, Bolivia, Peru, Ecuador, Honduras, Paraguay, and Chile, eager to displace Indigenous peoples, have invited the Israelis back to their nations to provide advice on depopulating indigenous regions as systematically as Israel has done to Palestinians in the West Bank and East Jerusalem.

In Israel a complex network of officials has conspired together to deploy torture as a key expression of the dominant group's power over the group targeted for repression, displacement and elimination. The jurisprudence concerning the practice of torture in Israel is replete with loopholes and exceptions. The result is that Shin Bet agents and others are afforded wide discretionary powers to torture Palestinians on the grounds of "necessity" and "ticking-bomb" scenarios.

It has come to light that many medical doctors and other health professionals are deeply involved in falsifying evidence to downplay accusations of torture.

Since 2001 the Israeli agency, Shin Bet, has received over 1200 complaints that the torture of Palestinians has taken place in Israeli prisons. This large body of complaints did not result in even a single indictment. One factor in this outcome is the failure of Israeli authorities to record "security interrogations." Great care is taken to not produce an evidence trail.

Many Palestinians tortured in Israeli prisons are incarcerated on the basis of "administrative detention" rather than actual criminal charges. Oftentimes these administrative detentions, which can run as long as six months, are renewed at the last minute. Individuals can thus be held in prison indefinitely without any trial whatsoever and without any certainty about what lies ahead for themselves and their families. The anxiety created by this uncertainty has been described as a form of "induced desperation," as a mental torture in its own right.

Many of those kept in military detention on the basis of seemingly endless renewals of administrative detentions go on hunger strikes. The forced feeding of those on hunger strikes sometimes results in serious injury and even death, an outcome that has attracted some political and juridical responses in Israel.

It is estimated that since 2000, 10,000 children from the Occupied West Bank have been held in the Israeli military detention system. The vast majority of these children experienced "physical violence" after their arrest. Ninety-six percent of the children were interrogated without the presence of a family member. According to an NGO entitled, Defense for Children International,

Children often give confessions after verbal abuse, threats, physical and psychological violence that in some cases amounts to torture.

There are wide variations in the types of torture applied by Israeli agents to those violated by this internationally outlawed act. The Middle East Monitor reports that well over 100 unique varieties of torture have been identified in Israeli prisons.

Yara Hawari has presented the following list of torture techniques frequently deployed on Palestinian victims. They include:

Related Topic(s): Israel; Israel And Palestine; Israel Lobby; Israeli Racism; Israeli_Propaganda; Israelification; Torture 13; Torture AntiTorture Legislation, Add Tags
Add to My Group(s)
Go To Commenting
The views expressed herein are the sole responsibility of the author and do not necessarily reflect those of this website or its editors.