Who wins and who loses in the fake news sweepstakes?

In responding to an attack on a media venue about which I care a lot, this Canadian from Alberta Canada is being pulled into the swamp. I find myself showering repeatedly to try to wash away the scum from the quagmire created by CNNand the Editorial Board of the Washington Post. These media operations have decided to band together as protagonists in a smear campaign aimed at discrediting American Herald Tribune.

AHT is a news site that I helped get off the ground beginning in 2015 when I agreed to become Editor in Chief of the small but exceptionally lively Internet publication. In wrongfully accusing AHT, CNN and Washington Post are adding to the scale of a wide constituency that is coming to the conclusion that these media operations are serial manufacturers of fake news.

In doing research into the antics of the two media ventures I came across the story of a well-publicized move by a member of the Tennessee Legislature to have CNN and Washington Post legally reprimanded. Representative Micah Van Huss formulated a resolution asserting "the State of Tennessee recognizes CNN and Washington Post as fake news and part of the media wing of the Democratic Party." The text of Resolution 779 continues,

BE IT FURTHER RESOLVED that we condemn them [CNN and Washington Post] for denigrating our citizens and implying they are weak-minded followers instead of people exercising their rights that our veterans paid for with their blood.

I see something new in this formal enactment in a US Legislature of such severe animosity to mainstream media. New too is the decision to divide mainstream venues in the United States into partisan publicity networks closely connected to one of the two major political parties. These developments have ominous implications.

In prior times it seemed that a major function of mass communications in the USA was to create and marshal popular support for the invasions of foreign countries. These days the agenda has widened to include preparing the conceptual ground for civil war within the United States.

The promotion of the conditions for civil war are unfolding concurrently with a new stage of the campaign to pull the United States into war with Iran. This agenda was advanced in the opening days of the 2020s when Donald Trump shocked the world by immediately claiming credit for the grotesque drone assassination in Baghdad of top officials in both the Iraqi and Iranian governments. The assassinations extended to members of the entourage travelling with them.

This graphic proof that US Commander In Chief, Donald Trump, had gone rogue was followed by perhaps the largest, most solemn, most public and most extended funeral I can remember. As the funeral procession went between eight cities in Iraq and Iran, there was a huge outpouring of heart-felt emotion as people turned out by the millions to commemorate the life and martyrdom of General Qassem Soleimani. 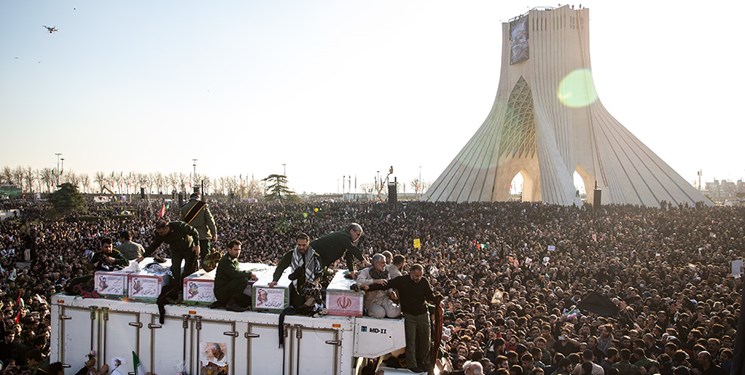 Soon after the funeral the Facebook Corporation provided one of the indicators that the US war machine was being revved up by dehumanizing the possible future targets of mass murder by the US Armed Forces. Those who follow the machinations of Facebook closely will understand the social media giant has been successfully recruited as an instrument of militarized propaganda for the Israeli and US governments.

The Facebook crew removed posts that in words or in pictures expressed grief for the loss of General Soleimani or expressed any sort of positive recognition of the values he embodied throughout his life. In a world of many armed forces and many career soldiers, it seemed for a brief moment that a wide diversity of people on all sides of numerous military divisions could agree on something. Many individuals found in the persona of the departed Qassem Soleimani an embodiment of the universal qualities residing in martial dignity and steadfastness.

Facebook is setting very menacing precedents with its decision to censor the opinions of the great mass of humanity who laments the outcome of the Baghdad drone assassinations. In order to justify its actions the officers of Facebook invoked the pseudo-laws of the post-9/11 era. They argued that Facebook was acting in conformity with Donald Trump's very political move to designate Iran's Islamic Revolutionary Guards (IRGC) as a terrorist organization.

Related Topic(s): American Empire; American Hegenomy; American Hypocrisy; American Imperialism; Assassination; Facebook; Internet; Iran; Media; Propaganda; (more...) Soleimani; Washington Post, Add Tags  (less...)
Add to My Group(s)
Go To Commenting
The views expressed herein are the sole responsibility of the author and do not necessarily reflect those of this website or its editors.