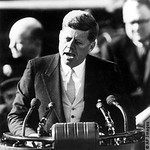 Simplicity is of the utmost importance for efficient operation of everything from the smallest invention to all of Nature. Albert Einstein wrote, "Our experience hitherto justifies us in trusting that nature is the realization of the simplest that is mathematically conceivable."

This principle of simplicity in Nature can be extrapolated into politics and correct the biggest problem democracy in the United States is suffering under: the wealthy and their special interest groups purchasing politicians and elections and rendering voting meaningless.

When John Kennedy was running for the office of President of the United States in 1960, he had a very rude awakening. Congressman Paul Findley shared this enlightening moment John Kennedy had on page 114 of They Dare to Speak Out: People and Institutions Confront Israel's Lobby. Findley wrote:

"The night before, Kennedy had gone to dinner with a small group of wealthy and prominent Jews in New York. An episode of the evening trouble him deeply. Describing it to Bartlett as an 'amazing experience," he said one of those at the dinner party - he did not identify him by name - told him he knew his campaign was in financial difficulty and, speaking for the group, offered 'to help and help significantly' if Kennedy as president 'would allow them to set the course of Middle East policy over the next four years.' It was an astounding proposition."

Kennedy told his friend, Charles Bartlett, that this offer made him feel insulted, not as a candidate, but as an American citizen. Most people know that things like this go on all the time in politics. This is a major reason why the majority of people who can vote decide not to vote. By not voting, they are voting against the entire corrupt system.

This experience inspired Kennedy to come up with an idea that would break the legs of the powerful 1% and their special interest groups while protecting true democracy. That idea is to have a law that would subsidize presidential campaigns out of the US Treasury. He felt that the cost incurred by this would be well worth it as it would "insulate presidential candidates in the future from this kind of pressure and save the country a lot of grief in the long run."

If this idea of President Kennedy's had been made a reality, just imagine how much better things would be today. In just one aspect of world politics and life, Israel and the Middle East, the billions of American tax dollars US politicians from both parties take from Americans and give to Israel every year would more than likely stay in the US and put to use helping American citizens instead of a warmongering foreign state. The overly powerful Israel lobby (Kennedy tried to require the Israel lobby to register as a foreign agent) would not be able to virtually, and in some cases, literally, write US foreign policy for the Middle East which would mean the Iraq War, which was launched for Israel's benefit, never would have happened. If the Iraq War never happened, al Qaeda never would have gotten into Iraq and the Islamic State terror organization never would have come into existence.

President Kennedy's plan to subsidize presidential campaigns should also be applied to all political campaigns. This would virtually guarantee protection on all levels from the damaging influence of the 1% and their special interest organizations.

Working to implement Kennedy's idea, especially after the Citizens United v. Federal Election Committee US Supreme Court decision, would definitely be an uphill battle. But the beautiful simplicity of his idea would attract a lot of people and their support.

With Memorial Day, 2017 being the 100th birthday of President John F. Kennedy, we should honor him, while helping to resurrect democracy, by promoting his idea of protecting democracy from powerful special interest groups to the best of our ability.

Bob Johnson is a paralegal and a freelance writer in Florida. He was raised Roman Catholic, but after reading Thomas Paine's The Age of Reason, he became a Deist. In 1993 he founded the World Union of Deists and in 1996 he launched the first web (more...)
Related Topic(s): Democracy; Democracy; Elections; Israel; President John Kennedy, Add Tags
Add to My Group(s)
Go To Commenting
The views expressed herein are the sole responsibility of the author and do not necessarily reflect those of this website or its editors.