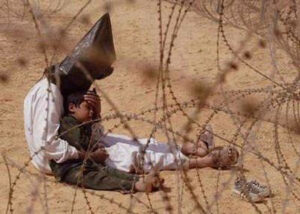 You knew it would backfire. Whether in Iraq, Afghanistan, or GITMO, it was bound to happen. The Bush Crime Family failed at virtually everything during it's eight-year illegal reign of terror, but it did succeed in becoming a powerful recruiting tool for otherwise innocent Middle-Eastern (for the most part) citizens who were so brutalized by US policies they joined anti-American organizations.

What would you do if a foreign invader ravaged America, locked up your innocent family members, raped your wife and daughters, killed your children, ruined your economy, bombed your home and destroyed every aspect of your life? Would you not fight back? Seek justice against the torturers who ruined your life? The surprise in the latest Wikileaks revelations about the torture and extreme abuse committed in our names at GITMO is not that many of the (eventually) released innocent detainees later joined the Taliban or al Qaeda, but that some did not. Bush/Cheney are poster boys for al Qaeda, and have increased the threat against Americans a thousand fold.

The truth about GITMO, exposed in leaked documents written by the very people who ran the place, show the inhuman brutality and torture against a group of 779 "enemy combatants" held without formal charges, without civil rights, on the thinnest pretext and interrogated for years without gleaning one iota of useful information that would -- allegedly -- "keep America safe."  What possible good could come from torturing a 14-year-old kidnap victim for being a possible spy?  Or locking up an 89-year-old man suffering senile dementia in an ice-cold cell because he was caught up in a raid at the house of a suspected Taliban member?

Is this what our young men and women are fighting and dying for, Truthseekers?

We heard warnings of rampant GITMO abuse before this and turned a (mostly) blind eye to the photos of hooded detainees, shackled and herded into boxcars. There were the usual hearings on Cspan with the usual results. Nothing.  Limbaugh likened the place to Club Med, the Neocons chuckled, politicians waxed poetic about the fresh fruit the detainees enjoyed and the beautiful coastline at the detention center ( as if they wished they could spend a leisurely vacation there) and our wide eyes turned to heavy lids as our heads rotated back to American Idol and Dancing With the Stars.

Unspeakable actions have become the norm.  Waterboarding  -- simulated drowning -- is an acceptable form of interrogation to most of us now. Therefore it is no surprise that we face this latest Wikileaks information on the unspeakable horrors enacted in our names with a yawn instead of dropped-jaw.

How long can we marginalize our humanity and still consider ourselves good people?

Kathy never expected a career in radio as a talk show producer. Born and raised in Atlanta, Georgia, Kathy was completing her nursing degree when in 2001 - in an emergency - she was asked to fill in as the producer of Mike's program. Within a few (more...)
Related Topic(s): Brutality; Detainees; Waterboarding; Wikileaks, Add Tags
Add to My Group(s)
Go To Commenting
The views expressed herein are the sole responsibility of the author and do not necessarily reflect those of this website or its editors.