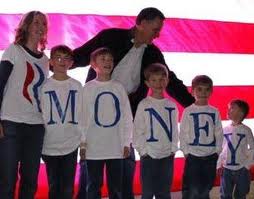 "Man of the People" Mittens paid a paltry 13% tax rate on his millions and millions and wants to keep it that way, even as most of  the middle class struggles to cough up the required 30% of their much smaller salaries. The Neocons in Congress aren't serious about lowering taxes, unless it's on their wealthy cronies. If they were truly interested in the welfare of the people they would consider what's now known as "The Buffett Rule," in which wealthy Americans with earnings in excess of $1 million a year would pay the same 30% rate as those earning, say, $50,000 a year.

But Senate Republicans demonstrated their lack of compassion for the working class again, blocking the legislation from even coming to the floor for a vote. Just one Republican, Maine's Susan Collins, voted to allow debate on the legislation, but the bill failed to receive the 60 votes needed for consideration.

We're at a point where we can't even debate a fair tax law in this country? Remember that come election day in November. Your Republican Congressional representatives care not a whit about the people in their districts, unless they are all multimillionaires. Won't even allow the issue to be discussed. Representative democracy? Not so much ...

"A CNN poll was released putting support (for the Buffett Rule) at 72 percent, including 53 percent of Republicans.

"Mr. Romney paid an effective tax rate of 13.9 percent on $21.7 million in income in 2010, the only full year's tax returns he has released. The Obama re-election campaign and the Democratic National Committee again pressed Mr. Romney on Monday to release more than a decade's worth of tax returns, something his campaign has refused to do.

"Instead of consideration of the Buffett Rule, the House will vote on a bill by Representative Eric Cantor of Virginia, the majority leader, to give businesses with fewer than 500 employees a 20 percent tax cut this year. Mr. Cantor says that while the Buffett Rule would raise taxes on "job creators," his bill would spur job growth by easing the tax burden on small businesses.

"Republicans and Democrats have created mirror-image arguments to take into the election year. The Cantor bill would cost the Treasury $46 billion. The Senate Democratic bill would raise $47 billion over 10 years -- but $160 billion if the Bush era tax cuts for the affluent are extended."

Listen up, Teabaggers, you're always screaming about the government debt and deficit spending -- the Democrats have a plan to add $47 billion to ease the debt and spur the economy. But the Republicans would rather drain another $46 billion to give the kind of tax breaks which have proven useless to economic recovery in the past (see: Reagan/Bush I/Bush II).

If you REALLY want to keep more of your money and reduce the Federal deficit, you'll vote for the Democrats. Heck, if we can reduce the "Defense" budget a bit, tax the millionaires at a fair rate, improve our national infrastructure, and maintain some form of affordable health care in this country, we might actually survive as a nation!

What would the Teabaggers say about that?

Kathy never expected a career in radio as a talk show producer. Born and raised in Atlanta, Georgia, Kathy was completing her nursing degree when in 2001 - in an emergency - she was asked to fill in as the producer of Mike's program. Within a few (more...)
Related Topic(s): Money Buys Power; Neocons; Republican; Taxes; Teabaggers, Add Tags
Add to My Group(s)
Go To Commenting
The views expressed herein are the sole responsibility of the author and do not necessarily reflect those of this website or its editors.