Click Here to Remove All Ads
Congress shall make no law respecting an establishment of religion, or prohibiting the free exercise thereof; or abridging the freedom of speech, or of the press; or the right of the people peaceably to assemble, and to petition the Government for a redress of grievances.

The First Amendment of the US Constitution. That was the particular passage Rep. Gabirelle Giffords (D/AZ) read in the well of the House last Wednesday on the first day of the new session of Congress. 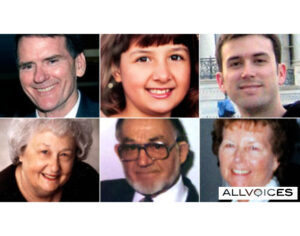 Fulfilling this Constitutional responsibility, three days later she held a public meeting for her constituents outside a Safeway grocery store so they could express their concerns about our government with her directly. Sadly, the assembly was anything but peaceful as Jared Lee Loughner, a 22-year-old failed military recruit and college drop-out with a history of drug use and mental illness, opened fire on the unsuspecting crowd. Seconds later the Congresswoman had suffered a "through and through" gunshot wound to the skull. She is struggling for her life following emergency surgery, her astronaut husband by her side. Two others were wounded and six were killed, including Federal judge John Roll and nine-year-old Christina Green.

According to the Independent Mail, "Christina attended the event . . . with a family friend who thought the child would enjoy seeing politics in action. She had just been elected to her school's student council. "I allowed her to go, thinking it would be an innocent thing,' said her mother, Roxanna Green. It was anything but for the child born on Sept. 11, 2001, a little girl who was proud of a coincidence that represented the good that still happens in the world despite the evil that men do."

The accused Mr. Loughner has invoked his 5th Amendment rights and thus far has refused to speak to authorities about the massacre. Ironically, he asserts his right to protection, yet he denies the most basic right -- the right to life -- to his victims.

How do we understand the mind of a man who will shoot a child in the head at point-blank range as casually as Dick Cheney obliterates a flock of doves or Sarah Palin a pack of wolves from a helicopter? The blank moral bankruptcy, the banality of evil, the clinging to guns, the embracing of violent rhetoric that permeates the right wing in this country never fails to astonish. Nor does the short, convenient memory of our mainstream media, which is quick to remind us that there are extremists "on both sides" inciting these lunatics to violence. 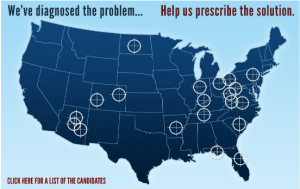 Truthseeker, have you ever seen a website run by a Democrat that is ripe with incendiary "don't retreat -- reload!" rhetoric while displaying a national map peppered with gun-sight crosshairs and shooting targets hovering over the districts governed by their opponents? Giffords was a literal target of Sarah Palin and the Teabaggers and she knew it, as Giffords herself remarked on MSNBC before the last election, "We're on Sarah Palin's 'targeted' list, but the thing is, the way she has it depicted, we're in the crosshairs of a gun sight over our district. When people do that, they've gotta realize that there are consequences to that action."

Not for Smiling Sarah Barracuda, apparently, as she remains healthy and unharmed, free to continue killing Alaskan wildlife . . . while the Congresswoman who was shot while fulfilling her duty to her constituents fights for her life in an Arizona ICU.

And not for the apologists in the right-wing-controlled media who claim (with straight faces) there is no difference between the vitriol on the left and the vitriol on the right, as if there's some equivalency between Glenn Beck and Jon Stewart, or Rush Limbaugh and Thom Hartmann,or Fox "News" and MSNBC. If Loughner listened to Glenn Beck in the recent past, Media Matters has tracked some of the inciting directives he would have heard:

"I'm going to find these people that have done this to our -- you know, to our country, and expose them. I don't care where -- I don't care if they're in nursing homes. I'm going to expose what they have done and make sure that the people understand, because our Constitution, our republic -- if it survives -- it will only survive because the people are waking up and through the grace of God, because we are that close to losing our republic. [The Glenn Beck Program, 1/20/10]

Beck: "Grab a torch." Asserting that politicians are addicted to spending, Beck stated: "When do we ever run those who are bankrupting our country and literally stealing our children's future out of town? Grab a torch." [Glenn Beck, 1/6/10]

Beck's advice to Liberty grads: "Shoot to kill." During his May 15 commencement speech at Liberty University, Beck told graduates that they "have a responsibility" to speak out, or "blood " will be on our hands." His advice for graduates (as well as his daughter) included "shoot to kill."

Remember the victims of the Tuscon massacre, and ask yourself the next time you hear the media lie that the "left is as bad as the right" -- when is the last time a liberal wack-job went on a killing spree?

Kathy never expected a career in radio as a talk show producer. Born and raised in Atlanta, Georgia, Kathy was completing her nursing degree when in 2001 - in an emergency - she was asked to fill in as the producer of Mike's program. Within a few (more...)
Related Topic(s): Glenn Beck; Jared Loughner; Palin; Political Assassinations; Rep Gabrielle Giffords; Republican GOP Dirty Tricks; Republican Hypocrisy; Republican-slime-machine; Speech, Add Tags
Add to My Group(s)
Go To Commenting
The views expressed herein are the sole responsibility of the author and do not necessarily reflect those of this website or its editors.