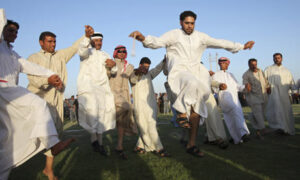 Iraq today is suffering a major psychic schism: citizens are jubuliant and celebratory over the long-awaited withdrawal of US occupying forces in major cities, yet simultaneously fearful of the sectarian violence that will rise as security forces depart.

"Out, America, out!" a group of sweat-drenched young men chanted Monday at a Baghdad park as the sun was setting The Washington Post reports. They jumped up and down to the deafening beat of drums and the wail of horns. Across town, the virtual absence of American troops and helicopters, the cheerfulness of Iraqis in military uniform, and the cries of joy gave this scarred, bunkered capital a rare carnival-like atmosphere. Iraqi police and army cars were decked with ribbons, balloons, plastic flowers and new flags.

Ecstatic Iraqi (puppet) Prime Minister Nouri al Maliki is eager to print up the Hallmark greeting cards, proclaiming today as "National Sovereignty Day," and stating in language eerily reminiscent of Rove and Rumsfeld that "The national united government succeeded in putting down the sectarian war that was threatening the unity and the sovereignty of Iraq," adding, "Those who think that Iraqis are unable to defend their country are committing a fatal mistake." Uh . . . is the sectarian war over and nobody told us?  Is that like, "Mission Accomplished?"  Don't you need a big banner, aircraft carrier, and codpiece before you make such a whopper of a declaration?  (I know a library in Texas where you can borrow them, cheap!)

Gag me with a copy of Orwell's 1984.  The remainder of the scripted press release actually thanked the US invaders/occupiers for putting the puppet government in power: "While we celebrate this day, we express our thanks and gratitude to our friends in the coalition forces who faced risks and responsibilities and sustained casualties and damage while helping Iraq to get rid from the ugliest dictatorship and during the joint effort to impose security and stability," Iraqi President Jalal Talabani exclaimed today.  There were no separate expressions of celebration for the hundreds of thousands of dead and maimed Iraqi civilians, or the tens of thousands of dead and maimed "coalition" forces.

In those areas of Iraq outside the Fantasy Island Green Zone, in neighborhoods where  Iraqis who are not the fortunate ruling class live, there has been a definite, frightening spike in violence as today's deadline grew closer.  More than 250 people were killed in a series of bombings over the last few weeks, including one on June 20 that left 81 dead outside a mosque in northern Iraq and another in a Baghdad market on June 24 that killed 78. The past few days have been particularly bloody, with a Mosul bombing killing ten Iraqis on Monday and at least four U.S. soldiers killed since Sunday.  American forces are still attacked daily according to sources on the ground.  A car bomb just  killed at least 24 people in a northern Iraqi city earlier today. And the problem of ill-trained and inadequately equipped Iraqi police and security forces still remains an unanswered question, deepening the fear that a new insurgency might plunge the nation into greater violence, death, and destruction than before the US withdrawal.

This is the legacy of the Bush/Cheney invasion and occupation: Complete and total devastation of Iraq.  But the real objective has been accomplished: The oil fields are open again and foreign energy companies are lining up to get a piece of the action.

According to The Media Line , "For the first time since Saddam Hussein expelled international oil companies more than 30 years ago, Iraq will open the bidding for its oil fields to foreigners on Monday. Companies from the United States, the United Kingdom, Japan, Australia, China, Italy, Russia, France, South Korea, Spain, Norway, Holland, Canada, Denmark, India, Malaysia and Indonesia will take part in the country's first post-war bidding for oil service contracts."

And that's all that really matters, right?  So break out the party hats and plastic noisemakers, and raise a cup-o-crude to the Bush Crime Family!  Yea Halliburton!  Yea Blackwater!  Yea Big Oil!  Hip Hip Hurray!  It's "Sovereignty Day!"

Kathy never expected a career in radio as a talk show producer. Born and raised in Atlanta, Georgia, Kathy was completing her nursing degree when in 2001 - in an emergency - she was asked to fill in as the producer of Mike's program. Within a few (more...)
Related Topic(s): International; Iraq; Iraqis; Oil; Sovereignty; Violence, Add Tags
Add to My Group(s)
Go To Commenting
The views expressed herein are the sole responsibility of the author and do not necessarily reflect those of this website or its editors.