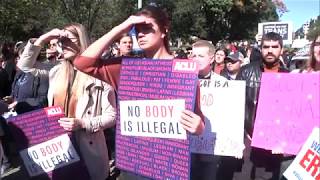 Trump will stop at nothing to steal this election. Lying that more tax cuts are coming (while Congress is in recess?), claiming the "caravan" of Honduran refugees contains ISIS members and is funded by George Soros, ripping children from their parents if they do make the border...now declaring in a leaked memo that transgendered people simply don't exist.

Yup, that's right. There is no such thing as transgender. Only the pubes you're born with count. Ridiculous.

The NY Times broke the story:

"The Trump administration is considering narrowly defining gender as a biological, immutable condition determined by genitalia at birth, the most drastic move yet in a government-wide effort to roll back recognition and protections of transgender people under federal civil rights law.

"A series of decisions by the Obama administration loosened the legal concept of gender in federal programs, including in education and health care, recognizing gender largely as an individual's choice and not determined by the sex assigned at birth. The policy prompted fights over bathrooms, dormitories, single-sex programs and other arenas where gender was once seen as a simple concept. Conservatives, especially evangelical Christians, were incensed.

"Now the Department of Health and Human Services is spearheading an effort to establish a legal definition of sex under Title IX, the federal civil rights law that bans gender discrimination in education programs that receive government financial assistance, according to a memo obtained by The New York Times.

"The department argued in its memo that key government agencies needed to adopt an explicit and uniform definition of gender as determined 'on a biological basis that is clear, grounded in science, objective and administrable.' The agency's proposed definition would define sex as either male or female, unchangeable, and determined by the genitals that a person is born with, according to a draft reviewed by The Times. Any dispute about one's sex would have to be clarified using genetic testing.

"'Sex means a person's status as male or female based on immutable biological traits identifiable by or before birth,' the department proposed in the memo, which was drafted and has been circulating since last spring. 'The sex listed on a person's birth certificate, as originally issued, shall constitute definitive proof of a person's sex unless rebutted by reliable genetic evidence.'

"The new definition would essentially eradicate federal recognition of the estimated 1.4 million Americans who have opted to recognize themselves -- surgically or otherwise -- as a gender other than the one they were born into.

"'This takes a position that what the medical community understands about their patients -- what people understand about themselves -- is irrelevant because the government disagrees,' said Catherine E. Lhamon, who led the Education Department's Office for Civil Rights in the Obama administration and helped write transgender guidance that is being undone.

"The move would be the most significant of a series of maneuvers, large and small, to exclude the population from civil rights protections and roll back the Obama administration's more fluid recognition of gender identity. The Trump administration has sought to bar transgender people from serving in the military and has legally challenged civil rights protections for the group embedded in the nation's health care law.

"Several agencies have withdrawn Obama-era policies that recognized gender identity in schools, prisons and homeless shelters. The administration even tried to remove questions about gender identity from a 2020 census survey and a national survey of elderly citizens.

"For the last year, the Department of Health and Human Services has privately argued that the term 'sex' was never meant to include gender identity or even homosexuality, and that the lack of clarity allowed the Obama administration to wrongfully extend civil rights protections to people who should not have them.

"Roger Severino, the director of the Office for Civil Rights at the department, declined to answer detailed questions about the memo or his role in inter-agency discussions about how to revise the definition of sex under Title IX.

Kathy never expected a career in radio as a talk show producer. Born and raised in Atlanta, Georgia, Kathy was completing her nursing degree when in 2001 - in an emergency - she was asked to fill in as the producer of Mike's program. Within a few (more...)
Related Topic(s): Homosexuality; Memo; Transgendered, Add Tags
Add to My Group(s)
Go To Commenting
The views expressed herein are the sole responsibility of the author and do not necessarily reflect those of this website or its editors.