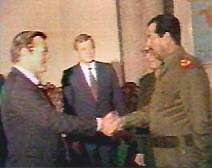 Do you remember him? The Iraqi defector/informant on whose lies the Bush Crime Family based their illegal invasion of Iraq, lo so many years ago, waaaaay back in 2003?

What was that, American Idol Year Two? Were we "Dancing With the Stars" then?

Seems "Curveball" is about to really spill his beans on British TV to explain why he felt it necessary to lie the US into invading an innocent nation. It was his disinformation that then Secretary of State Colin Powell presented to the UN Security Council to justify this reprehensible attack.

Remember Powell's powerful presentation of little vials of nerve gas? The aluminum tubes and yellow cake? The BS about the WMDs hidden in groves of palm trees?

According to The Independent:

"'Curveball,' the Iraqi defector who fabricated claims about Iraq's weapons of mass destruction, smiles as he confirms how he made the whole thing up. It was a confidence trick that changed the course of history, with Rafid Ahmed Alwan al-Janabi's lies used to justify the Iraq war.

"He tries to defend his actions: 'My main purpose was to topple the tyrant in Iraq because the longer this dictator remains in power, the more the Iraqi people will suffer from this regime's oppression.'"

Where is Rummy when you need him to put some serious spin on the unhappy ending of his bloody fairy tale?  Probably in one of his seven mansions around the globe, trying to figure out how to frame another ally-turned-enemy. The article continues:

"US officials 'sexed up' Mr Janabi's drawings of mobile biological weapons labs to make them more presentable, admits Colonel Lawrence Wilkerson, General Powell's former chief of staff. 'I brought the White House team in to do the graphics,' he says, adding how 'intelligence was being worked to fit around the policy.'"

Sexed up . . . how cute.  There are known knowns here, and we know Rummy knew there were no intact Iraqi weapons remaining at the time of the "sexing up" of the phoney evidence.  He knew how many there were, how many were used, and how many were destroyed.

After all, he had the receipts.

Kathy never expected a career in radio as a talk show producer. Born and raised in Atlanta, Georgia, Kathy was completing her nursing degree when in 2001 - in an emergency - she was asked to fill in as the producer of Mike's program. Within a few (more...)
Related Topic(s): Curveball; Disinformation; Evidence; Invasion; WMDs, Add Tags
Add to My Group(s)
Go To Commenting
The views expressed herein are the sole responsibility of the author and do not necessarily reflect those of this website or its editors.