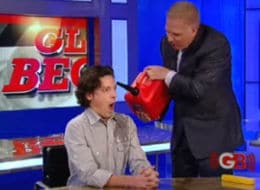 Glen "Tears of a Clown" Beck continues his public descent into madness, even as he rakes in untold millions from his new private network.

If you turned out the lights and listened carefully you could hear it coming. Beck was recently ranting about buying guns and farmland right after the November elections. Seems that's where the seeds were planted for his current Master Plan to create a Teabagger Utopia called "Independence USA" that appears to be a marriage of Disneyland and David Koresh's Branch Davidians.

Don't smirk, he could make it happen.

He may no longer be a Fox "News" darling, but he commands a legion of loony groupies who seek the secret message in carvings on government buildings and designs on the US dollar bill. Beck plays these fearful people perfectly. Not since the halcyon days of War of the Worlds and  Little Orphan Annie's secret decoder ring has broadcast radio seen a personality with the ability to manipulate a subset of the masses into believing that yes, there really is a clandestine entity  out there ready to get you. Generally speaking it's (shhhh ... ) the GOVERNMENT! But fear not, Beck holds the key to your very survival.

You could see the hinges start to rust on Beck's mental state years ago when he raved around his Fox "News" stage, pouring "gasoline" on a colleague, comparing the children murdered at a camp in Norway to Hitler Youth, manically scribbling random ramblings on his massive whiteboard, or warning of secret meanings in the name "Obama" and the word "Oligary" [sic]. There was a memorable episode in which Beck, sweaty with his own revelations, detailed -- with blown-up photographs -- how the "30 Rock" building that houses NBC and MSNBC is awash in communist/fascist carvings and symbolism.

Yeah. He did that.

This is the kind of home-grown psycho-synthesis of "enlightenment and entertainment" that caused Fox "News" to quietly unplug his equipment while pushing a pink slip (presumably with a long stick) under his padded dressing room door. (Think about it: How deranged do you have to be to get canned from Fox "News?" But I digress ...)

Then there was that whole quasi-religious "Restoring Honor" rally he held in Washington, where it was difficult to determine which was scarier -- Beck striding about the stage looking like an unhinged Charlton Heston Ten Commandments impersonation, or the fact that tens of thousands of rabid Teabaggers turned out to cheer him on.

And that was years ago. Beck has since carefully cultivated his brand-o-crazy into a money-making media machine capable of mobilizing masses of mentally fragile followers into believing anything from mind-controlling chemicals in your toothpaste to secret labs housing genetically engineered, weaponized mosquitoes, altered to create a tiny buzzing army of living biological weapons!

So when Mr. Beck stretched out his mighty arms and parted the Red Sea -- uh, that is -- unrolled the blueprints for Independence, USA, we should pay attention.

This is from the description on his own web site:

"What are the American Dream Labs building towards? Glenn gave a look at the big picture that everything is building towards: Independence, USA! While Independence is very much a dream at this point, the proposed city-theme park hybrid would bring several of Glenn's seemingly disconnected projects into one place. Media, live events, small business stores, educational projects, charity, entertainment, news, information, and technology R&D -- all of these things would have a home in Independence. With the rest of the country and the world going away from the values of freedom, responsibility and truth, Independence would be a place built on the very foundation of those principles. A retreat from the world where entrepreneurs, artists, and creators could come to put their ideas to work. A place for families to bring their children to be inspired.

"Independence, USA wouldn't be about rides and merchandise, but would be about community and freedom. The Marketplace would be a place where craftmen (sic) and artisan (sic) could open and run real small businesses and stores. The owners and tradesmen could hold apprenticeships and teach young people the skills and entrepreneurial spirit that has been lost in today's entitlement state.

"There would also be an Media Center, where Glenn's production company would film television, movies, documentaries, and more. Glenn hoped to include scripted television that would challenge viewers without resorting to a loss of human decency. He also said it would be a place where aspiring journalists would learn how to be great reporters.

"Across the lake, there would be a church modelled (sic) after The Alamo which would act as a multi-denominational mission center. The town will also have a working ranch where visitors can learn how to farm and work the land.

"Independence would also be home to a Research and Development center where people would come to learn, innovate, educate, and create. There would be a theme park for people to recharge and have fun with their families."

Read the comments under the article; the faithful are already lining up for their new tennis shoes and cups of Kool-Aid. Uh, all kidding aside ... what are The American Dream Labs? Beck has his very own labs? Does this give anybody else the willies, or just me? Labs ...?

Kathy never expected a career in radio as a talk show producer. Born and raised in Atlanta, Georgia, Kathy was completing her nursing degree when in 2001 - in an emergency - she was asked to fill in as the producer of Mike's program. Within a few (more...)
Related Topic(s): Glenn Beck; Rally; Teabaggers, Add Tags
Add to My Group(s)
Go To Commenting
The views expressed herein are the sole responsibility of the author and do not necessarily reflect those of this website or its editors.