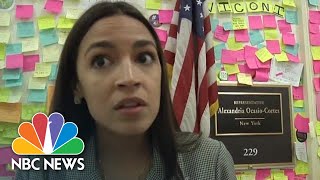 Donald Trump, Ivanka, and Tucker Carlson walk into N. Korea...no, its not the first line of a joke. Or maybe it is. But this really happened over last weekend. Tucker Carlson, whom I don't think has been senate-confirmed to represent the US abroad, is now participating in the foreign affairs of the United States with a murderous dictator. And Kim Jong Un.

Is anybody paying attention? Hellooooooo?

Not the Secretary of Defense, or Secretary of State, or National Security Adviser Bolton was exiled to Mongolia. But Tucker and Ivanka were on hand to witness Tinyhands' skip across the DMZ. Ivanka described the experience as "surreal." I can relate. Tucker excused KJU's killer streak by rationalizing that "you've got to be honest about what it means to lead a country, it means killing people."

Ladies and gentlemen we present America's new official spokesperson to N. Korea. Tucker Carlson. The new US policy toward dictators: "Go ahead, kill whoever you want!" It's "silly" to get upset about it! All the great leaders do it. Look at Trump! He's making good time at the US border. MBS slaughters journalists working in America and we do nothing, so go ahead! Putin has 'em poisoned and Tinyhands yucks it up at the G20. "Don't mess with our elections" he teasingly scolds, wagging his pudgy baby finger at the lethal KGB agent-cum-dictator.

Just like the mafia, Trump brought his family to meet the other mob boss. Not any US government officials, but his daughter, her hubby, and the Fox News sycophant. Every Don has a lackey in tow. Reality TV at its finest the Apprentice Season Finale. Kim got the full-on ring kiss from the self-appointed American Royal Family.

Explain to me how anyone benefits from normalizing Kim Jong Crazy? This propaganda tour only helps this killer gain power. It's a great "honor" to meet the man who tortured Otto Warmbier to death on his soil? Inviting him to the White House and complimenting his voice? What the actual f*ck? This guy has threatened the US with a nuclear strike how many times? Is it just because he writes Trump love letters?

What does it take, Truthseekers? Is there no way to restrain this madman before he permanently destroys the US position in the world? Or is everybody looking the other way because the stock market hit another record high?

Is that why nothing is being done about the horrific conditions at migrant facilities at the border? In case you missed it, Alexandria Ocasia-Cortez led a Congressional delegation on a tour of two migrant facilities in El Paso and Clint Texas and things didn't go as planned. She refused to take the "tour" border patrol agents had planned. The CBP agents were not pleased, and were hostile and menacing, demanding they surrender their cell phones. Some agents openly mocked the Congress members as others laughed.

Nevertheless AOC pushed into a cell where women were detained and began conversing in Spanish. The stories the women shared were tragic. CBP agents called them whores, woke them at all hours for no reason, and told them to drink from the toilet when they asked for water. Some had been detained for weeks-longer than the maximum stated policy. There were four showers for almost 800 migrants and they often wore the same filthy clothes for weeks. They were denied medical care and medicine. They cried and pleaded that she not share what they told her because they feared retaliation from the guards.

This is psychological and physical torture. We treat POWs better than this.

These CBP agents are on team Trump and they are ugly. Between detention center visits ProPublica broke a story about a secret 9,500-member CBP Agent Facebook page filled with vile comments about the upcoming Congressional visit, along with jokes about the deaths of migrants in their custody.

One member encouraged Border Patrol agents to hurl a "burrito at these bitches." Another, apparently a patrol supervisor, wrote, "f*ck the hoes." "There should be no photo ops for these scum buckets," posted a third member.

Kathy never expected a career in radio as a talk show producer. Born and raised in Atlanta, Georgia, Kathy was completing her nursing degree when in 2001 - in an emergency - she was asked to fill in as the producer of Mike's program. Within a few (more...)
Related Topic(s): Alexandria Ocasio-cortez; Border Cruelty; Border Wall; Doctors Without Borders; Torture; Trump, Add Tags
Add to My Group(s)
Go To Commenting
The views expressed herein are the sole responsibility of the author and do not necessarily reflect those of this website or its editors.