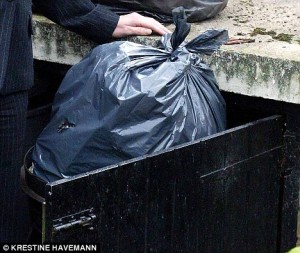 Do you recycle, Truthseekers? Do you separate your aluminum cans, plastics, and newspapers from the rest of your trash as a way of being (to a minimum degree) environmentally responsible? Mother Earth appreciates it, and so does the FBI because it makes it much simpler to sift through the remains of your discarded paperwork if they don't have to negotiate all those Styrofoam to-go containers and empty Evian bottles.

The new Domestic Investigations and Operations Guid e issued this week by the Bureau grants its roughly 14,000 agents considerable new authority to search databases, use surveillance to snoop on "suspicious" citizens, and yes -- dig through your garbage. Literally and euphemistically.

According to the San Francisco Sentinel, these new rules have aroused their own suspicion, and ACLU attorney Michael German, a former F.B.I. agent himself, is concerned that these new ultra-intrusive domestic spying powers are ripe for abuse, especially if the agency uses them on citizens against whom they have no real reason to suspect wrongdoing.

"Claiming additional authorities to investigate people only further raises the potential for abuse," Mr. German said, pointing to complaints about the bureau's surveillance of domestic political advocacy groups and mosques and to an inspector general's findings in 2007 that the F.B.I. had frequently misused "national security letters," which allow agents to obtain information like phone records without a court order.

Gee, and I thought those pesky ol' Bush-era domestic civil liberty abuses were behind us. They tossed that ol' color-coded "rainbow of terror alert" chart and are now just playing it straight and simple -- by digging through the trash.

Agents have asked for the right to rifle through our refuse because they claim they need to use information found in a subject's trash to put pressure on that person to assist the government in the investigation of others.

Uh-huh. As in, Well, Mr. Smith, it seems you have discarded a large number of empty condom boxes. Now we're not suggesting you're involved in a crime, but we hope you will help us find out who is operating a white slavery network out of your basement.

Even more fun, the new rules alter the "undisclosed participation" clause of the old manual, and would allow agents great leeway in their infiltration of private group meetings. The new manual says an agent or an informant may surreptitiously attend up to five meetings of a group without any restriction. So next time you're headed to your film club meeting at the local library, you might wanna make sure you're not screening anything from the Michael Moore oeuvre. If you are, better drive home by a different route, just to be sure.

And you might want to squeeze a shredder in between your trash can and recycling bin.

Kathy never expected a career in radio as a talk show producer. Born and raised in Atlanta, Georgia, Kathy was completing her nursing degree when in 2001 - in an emergency - she was asked to fill in as the producer of Mike's program. Within a few (more...)
Related Topic(s): Garbage; Surveillance, Add Tags
Add to My Group(s)
Go To Commenting
The views expressed herein are the sole responsibility of the author and do not necessarily reflect those of this website or its editors.