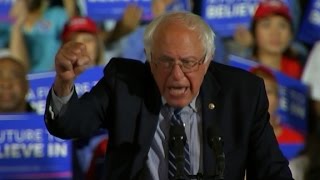 In the HBO series Game of Thrones, one overwhelming theme has dominated the six seasons: humans should not get lost in bickering for power when an existential threat looms. All the various clans -- the Lannisters, the Starks, the Targaryens, the Boltons, the Tyrells, the Baratheons, and others -- waste blood and treasure vying for control of this throne or that castle, while a zombie army with the capacity to eradicate humanity is slowly advancing from the north. Oh fools, you mortals be. And as the political primary season draws to an end, Democrats are in a position similar to that of the assorted houses of Westeros. An existential threat is on the horizon: Donald Trump. He's a narcissistic bigot who in power could be a profound danger. He seems to lack a basic understanding of the nuclear arsenal of which he would be in charge. He claims climate change is a hoax. He has vowed to play chicken with the debt ceiling. It is not hard to envision him triggering (or ignoring) crises that would threaten the survival of the United States or other parts of the globe. If he accepted budgets from the Republican-controlled Congress, millions of low- and middle-income Americans would lose assistance. And his Supreme Court appointments could well restrict reproductive rights, bolster corporate interests, and approve further erosions of voting rights. Make America great again? No, with Trump, winter is coming.

Given this harsh reality, Sen. Bernie Sanders, the socialist independent turned Democrat who has run a stupendous campaign that has promoted progressive causes and inspired millions, has a stark choice. To continue his crusade to win the Democratic Party's crown or to drop his claim and join forces with a rival to form a common front against the Night's King (that is, Trump). And he ought to reach a decision soon.

David Corn is  Mother Jones ' Washington bureau chief. For more of his stories,  click here . He's also  on  Twitter  and  Facebook .  RSS  |  TWITTER  David is (more...)
Related Topic(s): Bernie Sanders; Corporate; Donald Trump, Add Tags
Add to My Group(s)
Go To Commenting
The views expressed herein are the sole responsibility of the author and do not necessarily reflect those of this website or its editors.