It's Trump defenders and lefty Russia-gate skeptics claiming there is no scandal. 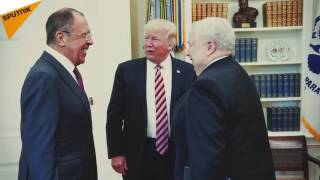 There has been much crowing from Trumpsters on the right and Russia-gate skeptics on the left about Special Counsel Robert Mueller's report. That is, the three-and-a-half-page letter Attorney General Bill Barr sent to Congress summarizing Mueller's work. (The report itself remains secret and is reportedly over 300 pages.) Pointing to Barr's citation of a single, partial sentence from the report ("[T]he investigation did not establish that members of the Trump Campaign conspired or coordinated with the Russian government in its election interference activities"), Trump and his partisans, as well as the small number of lefty Russia-gate deniers, have declared that because Mueller found no direct collaboration, the Trump-Russia scandal is kaput. Some have even declared it was a hoax -- and a gargantuan media con job -- from the start.

These critics are wrong. And here's an easy way to tell whether they are engaging in honest discourse.

Two fundamental facts were established long before Mueller completed his investigation. First, the Russians attacked an American election in order to sow chaos, hurt Hillary Clinton, and help Donald Trump. Second, Trump and his top advisers during the campaign repeatedly denied this attack was underway, echoing and amplifying Moscow disinformation (the false claim that Russia was not attacking). Whether or not the Trumpsters were directly in cahoots with the Russian government, they ran interference for Vladimir Putin's assault on the United States, and they even did so after the intelligence community had briefed Trump on Russia's culpability.

So to determine if the Barr triumphalists are acting in good faith, you need only ask them a simple question: do you accept these basic facts and acknowledge the profound seriousness of each one?

The Russian attack on the 2016 election was an attempt to subvert the foundation of American society: the democratic process. How can Americans have faith in their government, if elections are undermined by secret schemers, including a foreign government? It is certainly arguable that the Russian intervention -- particularly the stealing and drip-drip-drip dumping of the John Podesta emails across the final four weeks of the election -- was one of several decisive factors in a contest that had a narrow and tight finish. Consequently, there is a strong case that Moscow helped shift the course of US history by contributing to the election of Trump. (And recognizing this is not the same as defending Hillary Clinton or concocting an excuse for the Democrats' embarrassing loss to Trump.)

During the campaign and afterward, some Trump backers and some critics on the left, including columnist and media scold Glenn Greenwald, questioned whether the Russians indeed engaged in such skulduggery. (The Nation, where I once worked, published an article -- promoting a report that claimed the Russians did not hack the Democratic National Committee -- and then had to backtrack when that report turned out to be bunk.)

For many of these scandal skeptics, it hasn't seemed to matter that the charge against Moscow has been publicly confirmed by the Obama administration, the US intelligence community (which concluded that Putin's operation intended to help Trump), both Republicans and Democrats on the congressional intelligence committees, and Robert Mueller, who indicted a mess of Russians for participating in this covert operation. True, there often is cause to question officialdom and government sources. Yet anyone citing the Mueller report, as it is narrowly capsulized by Barr, must also accept his key finding: Russia attacked the United States and intervened in the election. (They must also accept that, as the Barr letter disclosed, Mueller found evidence suggesting Trump obstructed justice but did not reach a final judgment on this question.)

Moscow's intervention was an outrageous action, and concern about this should unite right and left and anyone in between. There is nothing more important in this whole affair than the attack itself. Those who are not profoundly distressed about the consequences and implications of that assault -- including those who instead focus more on distractions, such as conspiracy theories about the Deep State or the role of the Steele dossier -- should answer this question: Is it because you don't truly care this happened, or is it because acknowledging this reality interferes with your ideological or partisan loyalties? Or is it both? It is hard to see how a possible misuse of wiretapping authority by the Obama administration (an unproven assertion hurled by Republicans) or possible overstatements from Democrats or liberal pundits about Trump-Russia connections (which leftist skeptics have cited) could be more important than an attack on the US political system that was a factor in the outcome of the election.

Back to the second fundamental fact. On Tuesday, Trump adviser Kellyanne Conway, responding to the Barr letter, proclaimed, "The idea that any of us, and me as a campaign manager, would cheat, steal, lie, cut corners, talk to Russians, was an insult from the beginning." Her statement was a lie about lying.

The public record is undeniable: Trump campaign people communicated with Russians during the campaign numerous times. Donald Trump Jr., Paul Manafort, and Jared Kushner met with a Russian emissary who they were informed would slip them dirt on Hillary Clinton as part of a secret Kremlin plot to help Trump's campaign. Manafort, while serving as Trump's campaign chairman, secretly met with a Ukrainian-Russian business associate named Konstantin Kilimnik who was a go-between with Oleg Deripaska, a Putin-friendly Russian oligarch. Manafort handed Kilimnik private campaign polling data and discussed a so-called peace-plan that presumably would involve lifting sanctions on Russia. (According to Mueller, the FBI has concluded that Kilimnik was associated with Russian intelligence.)

Not to mention that through much of the summer of 2016, Trump foreign policy aide George Papdopoulos, according to Mueller, was trying to set up an "off the record" meeting with Putin's office. Carter Page, another foreign policy adviser, spoke with Russian officials in Moscow, where he made a speech assailing the West's tough stance against Putin for his violent intervention in Ukraine.

All of this occurred while Russia was attacking the United States. (Manafort met with Kilimnik and Papadopoulos reached out to Putin's office after it had been reported that Russia was the likely culprit in the hack-and-dump operation seeking to influence the US election.) And these contacts happened as Trump and his campaign -- most notably, Trump Jr. and Manafort -- were also publicly denying that any such attack was underway.

These denials had no basis in fact and ran counter to what cyber-security experts were saying -- but they precisely echoed what the Russians were saying: It ain't us! The combination of public denials and private contacts could only have been read as encouragement by Moscow. Trump at one point even called on Russia to hack Clinton's emails, and, according to a Mueller indictment, Russian government hackers attempted to do so that very evening.

David Corn is  Mother Jones ' Washington bureau chief. For more of his stories,  click here . He's also  on  Twitter  and  Facebook .  RSS  |  TWITTER  David is (more...)
Related Topic(s): Conspiracy; Denial; Investigation; Reality; Story; Vladimir Putin; Wikileaks, Add Tags
Add to My Group(s)
Go To Commenting
The views expressed herein are the sole responsibility of the author and do not necessarily reflect those of this website or its editors.