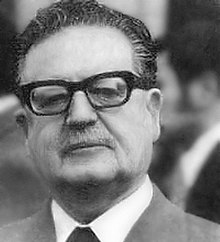 Washington D.C., November 3, 2020 - Several days after Salvador Allende's history-changing November 3, 1970, inauguration, Richard Nixon convened his National Security Council for a formal meeting on what policy the U.S. should adopt toward Chile's new Popular Unity government. Only a few officials who gathered in the White House Cabinet Room knew that, under Nixon's orders, the CIA had covertly tried, and failed, to foment a preemptive military coup to prevent Allende from ever being inaugurated. The SECRET/SENSITIVE NSC memorandum of conversation revealed a consensus that Allende's democratic election and his socialist agenda for substantive change in Chile threatened U.S. interests, but divergent views on what the U.S. could, and should do about it. "We can bring his downfall, perhaps, without being counterproductive," suggested Secretary of State William Rogers, who opposed overt hostility and aggression toward Chile. "We have to do everything we can to hurt [Allende] and bring him down," agreed the secretary of defense, Melvin Laird.

"Our main concern in Chile is the prospect that [Allende] can consolidate himself and the picture projected to the world will be his success," President Nixon explained as he instructed his national security team to adopt a hostile, if low-profile, program of aggression to destabilize Allende's ability to govern. "We'll be very cool and very correct, but doing those things which will be a real message to Allende and others."

Marking the 50th anniversary of Salvador Allende's inauguration, the National Security Archive today posted a collection of documents that provide a detailed record of how and why President Nixon and his national security advisor, Henry Kissinger, established and pursued a policy of destabilization in Chileoperations that "created the conditions as best as possible," as Kissinger later put it, for the September 11, 1973, military coup that brought General Augusto Pinochet to power. The detailed deliberations and decisions they contain clarify the misrepresentations by former policy actors over the years, Kissinger among them, of the true intent of the Nixon administration posture toward the Allende government. A half century after the inauguration, according to the Archive's senior analyst on Chile, Peter Kornbluh, "these documents record the deliberate purpose of U.S. officials to undermine Salvador Allende's ability to govern, and 'bring him down' so that he could not establish a successful, and attractive, model for structural change that other countries might emulate."

When the CIA's covert operations to undermine Allende were revealed on the front page of the New York Times in September 1974 by veteran investigative reporter Seymour Hersh they generated a major national and international scandal. The uproar over the clandestine U.S. role in Chile led to the first substantive congressional inquiry into U.S. covert operations, the first public hearings on CIA operations, and the first publication of a major case study, Covert Action in Chile, 1963-1973, written by the special Senate committee chaired by Senator Frank Church. "The nature and extent of the American role in the overthrow of a democratically elected Chilean government are matters for deep and continuing public concern," Senator Church stated at the time. "This record must be set straight."

Related Topic(s): CIA; Pinochet, Add Tags
Add to My Group(s)
Go To Commenting
The views expressed herein are the sole responsibility of the author and do not necessarily reflect those of this website or its editors.