Click Here to Remove All Ads
Republished from the Saker 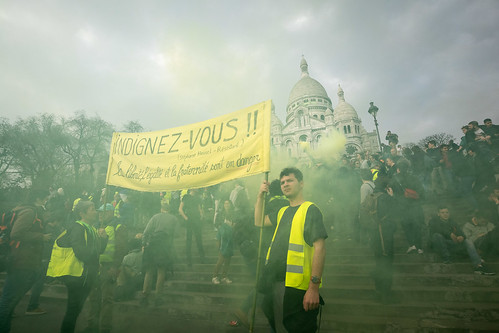 The Yellow Vests forced the French government to not present an austerity-laden annual budget for the first time in a decade.

You should be saying, "Wow, that is a historic achievement."

Please be clear: this is joyous, uplifting, pro-democracy, once-in-a-decade good news! An end to austerity is why France elected Francois Hollande in 2012, whose slogan was, "The change is now" the "change" was away from far-right, neoliberal austerity.

The entire history of austerity is pretty pathetic, and I have covered it daily from the beginning:

It was first a screaming conservative-capitalist reaction to the huge plunge in global economic growth. When the hysteria wore off and some sort of logical, verbal explanation became required, they decided it was necessary to appease the "confidence fairy" of investors. When people tired of belt-tightening to avoid giving financial speculators a bit of indigestion, it became necessary in order to appease Brussels' totally arbitrary "3% fiscal deficit rule". And then"people just stopped talking about it altogether, as I wrote. Austerity went on so long it was just viewed as unstoppable and vitally necessary the idea of a spending program instead of spending cuts stopped being discussed after Marine Le Pen lost the presidential election. Emmanuel Macron's first budget was the 2nd-harshest in postwar French history.

Given these reminders, we should ask in 2019: How many millions and millions of people have marched in France in the past nine years to end austerity, either openly or indirectly?

They all failed the Yellow Vests did not.

Furthermore, anyone who thought the Yellow Vests are useless have been proven totally wrong. The Yellow Vests have proven themselves to be more powerful than any other group unions, NGOs, political parties, and also even Brussels, central bankers, the investor class, the mainstream media because the French government ultimately bowed to the demands of the Yellow Vest demands and not those other groups.

Austerity: same as it ever was" only effective at increasing inequality

Budget austerity has three primary components: increased taxes on individuals and households, cuts to government services and decreased taxes on the wealthy and corporations. The goals are, in associated order: to weigh people down with so much debt as to make them fearful & compliant workers & citizens; to achieve the neoliberal/libertarian goal of reducing the government as much as possible, as only the government can provide socio-economic constraints on the 1%; to create profits for the 1%, which are going to "trickle down" at some unknown time (this hype not hope has been going on since Ronald Reagan).

What is the problem with austerity?

Well, morally (to take an economic tack never conceived in the West and in non-socialist inspired economies), taxing the poor to feed the rich is simply wrong.