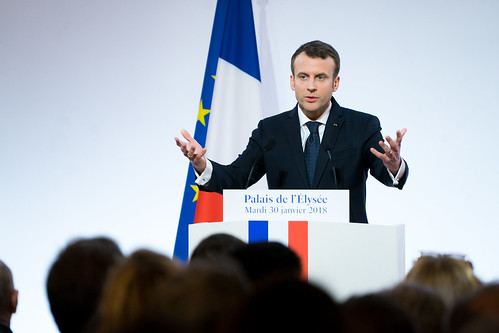 Everyone has been in this situation: You begin a new relationship, but it just didn't work out. Now the other person won't accept the answer is "no", regardless of how polite you are. But they keep calling and calling, nearly begging, and trying to fix what just can't be fixed. "Why did I ever get started with this mess," you wonder!

Iranian Leader Ayatollah Seyyed Ali Khamenei is apparently having this problem with French President Emmanuel Macron. Last week on Twitter Khamenei sounded as if he was at his wits' end with Macron's unwillingness to just move on:

"He contacts Iran and sends messages, saying that a single meeting with the US president will solve all the problems! One wonders if he is really so naïve, or just an accomplice and working with the US."

Khamenei should, as the kids say, just "ghost" Macron. But that's not possible because "ghosting" is rather heartless and, anyway, the Leader has accepted a lifetime of responsibilities Macron is reminding Khamenei of what a tough job he has.

The French seem to pride themselves on their cynicism and worldliness: "Naïf, moi?" However, Macron is so young to have so much power, so inexperienced politically, and evinces such a lack of historical and cultural knowledge that maybe he truly is just naïve?

In August Macron's outlandish claim of an Iran-US meeting "within weeks" seemed to rather naïvely imagine that Iranians would disregard four decades of US-led hot and cold war that quickly. However, we could explain it as an example of the West's politics of individualism: it came during France's hosting of a G7 summit, and Macron needed to reflect a victory to the international spotlight.

The fact that he is persisting appears laudable but it is so mistimed as to appear curious.

If Macron was calling because he truly wants mutually-beneficial, equal-partner business deals to improve France's economy which is beginning its second "Lost Decade - he seems to have forgotten that Iran and France signed exactly these types of bilateral deals in Paris in 2016.

I saw Macron was there with my own eyes, so naïvety is not an excuse here. Macron has been in office for 2.5 years so he has had plenty of time to get these deals started, but at this point the Iranian taxpayer hasn't even recouped the cost of sending the delegation to France.

Macron also had plenty of time to persuade his own central bank to start doing business with Iran, but Iranians in France will tell you the restrictions have only worsened. Of course, in the Western model central banks must be independent from the government and thus uncontrollable, unaccountable and knowingly detrimental to the nation Macron could change Donald Trump's decisions before he could any central banker's.

And then we have the issue of the JCPOA: no matter how many anti-Trump articles the Western mainstream media can muster, the reality is: France was one of seven signatories, and France did not honor its word.

So, Khamenei is just another exasperated Iranian who has given up on negotiations.

Iranian society has wasted 6 years discussing, arguing, voting, writing, editing and waiting for the JCPOA to finally work, but the West including Macron himself let it flounder, then get breached, then did nothing to rectify the wrongdoing.

Khamenei is correct that American demands of Iran will never be satisfied there are too many fundamental differences of principle at work. The US stretches out negotiations (at 159 pages, the JCPOA is the longest international treaty since World War II) in order to give their blockades and sanctions more time to wreak destabilizing damage in the hope of provoking more hot war is not civil war "hot" enough?

However, the reality is that the former Rothschild banker is no different than Trump he thinks he can make a deal on anything. What both of them fail to realize is that Khamenei believes, and so do many Iranians, that not everything is for sale.

Related Topic(s): Iran; Jcpoa; Sanctions, Add Tags
Add to My Group(s)
Go To Commenting
The views expressed herein are the sole responsibility of the author and do not necessarily reflect those of this website or its editors.