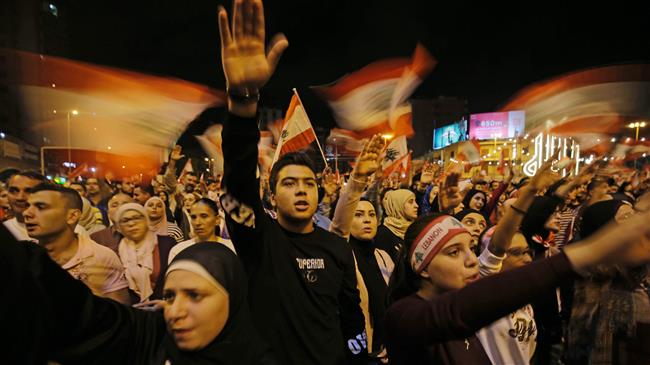 Lebanese protesters wave flags and shout slogans during an anti-government demonstration at al-Nour Square in the northern port city of Tripoli on November 2, 2019.
(Image by PressTV)   Details   DMCA

How the West deflects their ongoing neo-colonialism in Lebanon

I have spoken with many in France's huge expatriate Lebanese community - from all groups - and not a single person has ever claimed that Iran was the power behind the scenes in Lebanon. Without fail I was told that this title belongs to France.

Many Lebanese don't like to be reminded of this, but Lebanon is an artificial nation which France constructed entirely on the basis of racism: just as Zionists to the south wanted a "Jewish nation", Lebanon was hacked off of Syria in 1920 to create a new Christian-majority nation.

France also devised Lebanon's sectarianism-enshrining, a woefully unmodern constitution, which has ensured divisive identity politics ever since. Another colonial strategy of divide and conquer. A few centenarians may still remember the actual event.

Thus, just as Israel is a little part of the USA in the Middle East, Lebanon is the older, French version. The saying, "Beirut is the Paris of the Middle East" could not be more correct.

And yet, were an alien to visit and read Western mainstream media coverage of the recent protests in Lebanon it would not imagine that France ever had any role in Lebanon, much less a prominent role today.

Instead, Western headlines try to make the totally absurd claim that Iran has somehow become the neo-colonial master in Lebanon.

Somehow, according to Western headlines Iran has been able to usurp a century of French power, via the poorest, most marginalized sectors of Lebanese society? Furthermore, despite the century of French involvement it is not France but supposedly Iran which is mostly responsible for the corruption which has pushed so many Lebanese into the streets.

What: Iran took power and also became corrupt so very quickly that the Lebanese themselves didn't even realize it? The idea is laughable.

These are the kind of ideas only a Westerner could believe. The reason is simple: advertising works. Astute observers already realize that when it comes to the Middle East every problem - big or small - is blamed on Iran by the West.

However, what's rarely examined is how this very real Iranophobia allows the West to obscure places where their neo-colonial machinations could not be more obvious, such as in Lebanon.

Related Topic(s): Iran; Israel; Lebanon; Western Media, Add Tags
Add to My Group(s)
Go To Commenting
The views expressed herein are the sole responsibility of the author and do not necessarily reflect those of this website or its editors.