Republished from The Saker 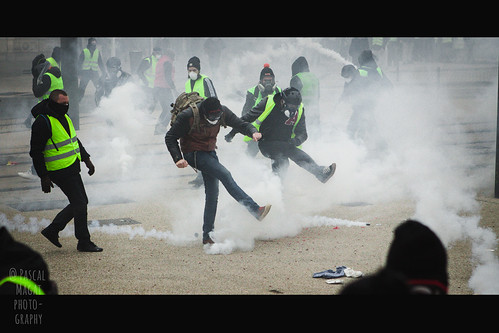 It's a question which needs to be asked, but we can't wait for the French media to answer it because they have almost totally stopped reporting on the anti-government movement for several months.

The first poll on the Yellow Vests since late March (!, and then ?) finally came out two weeks ago. It was so eagerly gobbled up by a French media hungry for objective knowledge on the Yellow Vests that as many as two media outlets talked about it. I missed it because I have already wasted a minimum of 3 hours of my life doing fruitless Google news searches for "Yellow Vest poll".

The headline of Ouest-France newspaper, by far the most read Francophone paper in the world, was typically "negative-no-matter-what": "A majority of France have had enough of the Yellow Vests".

That's a pretty bold statement considering that this majority is just 52%, which must be within the poll's margin of error.

The headline could have fairly been: "A majority of France still supports the Yellow Vests despite all the state repression and media negativity". Considering what a historic anti-government movement this is the French have just avoided a 9th consecutive austerity budge t expressly because of the Yellow Vests objective journalism would have prioritized the "support" angle and not the "oppose" angle.

More poll tidbits to munch on for those who care about public opinion (which means you are obviously not a Western politician):

Vesters are now openly opposed by retirees (63%), executives/management (61%) and technicians/professionals (58%). However, they are openly supported by workers (52%), rural citizens (47%), the National Front party (64%) and the (true, not far-) leftist Unsubmissive France party (80%). Per the pollers: "The Yellow Vests remain popular with those segments of the population which were at the origin of the movement."

One final poll petit-four, 93% of those who support Macron's party are against the Yellow Vests, while another recent poll showed that 98% of Macronistas think he is doing a good job. What this reminds us is that there is a hard-core Macronista base for whom he can absolutely do no wrong. I assumed such adoration was limited to 60+ year old single women dreaming of a winter-spring romance (an incredibly winter-spring romance), but it is a solid quarter of the population. This rate of genuine support is actually unchanged since the election in 2017: a quarter of France just adores this guy, no matter what, and apparently no amount of violence can change that.

Let's get to the point of this column

One segment of society which does not support the Yellow Vests is the 20- and 30-something crowd.

This is based on my regular attendance at Yellow Vest demonstrations, and also many months of informally talking with this age group (of which I am quite nearly a part of). I'd like to pass on what I think are the reasons for their opposition:

· We must remember that the Yellow Vests are primarily a middle-aged phenomenon the average of those marching is probably 50 years old. This age group is the one which is most motivated because they are nearing retirement and they see just how bad austerity will make things for them. This generation will not do anywhere as well as their parents, and they are rightfully upset they really had no chance to "succeed": they found jobs (or can't find any job) which will provide the personal nest egg which is required in the Anglo-Saxon system, which is the system that neoliberal austerity seeks to disruptively impose on France. The main problem is that French wages have always been far lower, and taxes quite higher, than their Western counterparts because the deal was that they'd have low wages but a much better social safety net. This deal has been terminated during the Age of Austerity, and Macron's absurd, inhuman "one-size-fits-all" pension reform is the coup de grâce. Therefore, this segment of society not professional, working class, low savings, not university educated, not thrilled with their job but still as vital to the functioning of society as you or me is leading the revolt because they know that if they don't" they will be working their low-paying job until they are 64 or their knees give out (whichever comes first), and then have a pittance of a pension to boot.

· What about the young adult Parisians? Firstly, this is an old persons' town you have to have money to live within its highway walls. But are you talking about those who were raised in Paris? I guess you mainly referring to those who grew up in the rich Western areas that place I go and look at like a tourist (seems nice over there), with all their fancy little kids and quiet and trees. People who grow up in these areas are rich these are the very Macronista urbanites who are young, terrifying and want to eat their elders. They view Macron as their leader, God and role model. So young adult Parisians manning the barricades? Fuggetaboutit. This holds true for all of France's cities.

· What about the working-class adult urbanites? Like in my area? Do you mean the Chinese, the Hasidic or the Arabs? All of these worker bees crammed into small, noisy apartments were likely turned off by the immediate and totally false smear that the Yellow Vests were racist. Also, the working class is often quite busy working.

Related Topic(s): France; Yellow Vests, Add Tags
Add to My Group(s)
Go To Commenting
The views expressed herein are the sole responsibility of the author and do not necessarily reflect those of this website or its editors.