The National Institute of Standards and Technology (NIST) was tasked with explaining the destruction of the Twin Towers (WTC 1 and WTC 2) and Building 7 (WTC 7). In spite of the mandate, NIST's analysis focused on the structural response of the building elements, but did not attempt to explain the actual destruction.

Because of NIST's abdication of an official explanation for the observed destruction, over the last 19 years conjecture has focused on the use of "explosive detonations". However, there is scant evidence in the audio record for the use of traditional high-explosive detonations (e.g., molecular explosives). Furthermore, the structural remnants including steel beams, columns and connections do not exhibit a widespread pattern of damage to support "explosive detonations" as a significant factor.

For much of the buildings' destruction, the observations show a highly energetic propelling force that was activated floor-by-floor with the origin of this force centered at the buildings' core / elevator shafts and radiating outward in the north-south-east and west directions. This observed propelling force is hypothesized to be based on a nano-thermite material that was "tuned" to be more like a rocket fuel than either an explosive or an incendiary. This type of material would be more explosive than a propellant and not as explosive as "molecular" or high explosives.

The activation of this propellant would create forces that traveled across the office areas in a very high-temperature thermal stream that would have been hot enough to contain molten iron that would later cool into iron spheres. The effect of the passage of such an energetic stream on office contents, humans, and asbestos fireproofing would be to dissociate virtually everything encountered. The propellant-derived forces would have accelerated the office furnishings and even floor-truss components toward the perimeter column sections, creating immense simultaneous outward forces that the building was not designed to withstand. These forces resulted in the separation of the structure at its weakest point, which was the interior bolted connections between the floor trusses and the steel "channels" along the outside of the core.

The outer-perimeter wall sections were then propelled outward and peeled downward and outward through most of the height of the towers. This mechanism would have progressed down the structure at a relatively constant rate optimized by mechanically determined parameters using, and leveraging, gravitational forces.

To separate the office area from the core would have required the destruction of only 28 5/8-inch bolts on the short side of the core and 40 bolts on the longer side. It appears that because of this weakness, the propelled demolition described above was used instead of a more traditional process that would have been consistent with the (officially endorsed) "Bazant's pile-driver" theory. 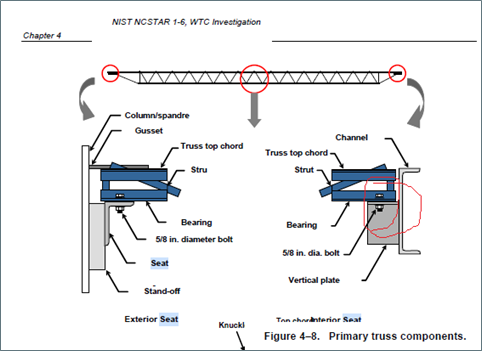 Details of the Propelled-Demolition Hypothesis

As shown by the red arrows in Figure 3, the propellant was activated at the core and propelled in all directions simultaneously. The perimeter columns around the outside of each floor would all be pushed outward simultaneously, which matches the observations. In accordance with Newton's third law, "for every action, there is an equal and opposite reaction", the propulsive force to push the exterior-perimeter columns outward must be created by an equal "reactionary" force in the opposite direction such as into the region of the core columns and then out through the opposite side of the Tower.

Related Topic(s): Demolition; Evidence; Explosives; Tower7; Twin Towers, Add Tags
Add to My Group(s)
Go To Commenting
The views expressed herein are the sole responsibility of the author and do not necessarily reflect those of this website or its editors.