On the morning of 9/11 approximately six seconds after the top block of the South Tower began a hinging movement to the east, that top portion of the South Tower was completely demolished by outwardly directed, energetic forces which many people (imprecisely) attribute to "explosives." This top block of the South Tower was large and consisted of approximately 30 floors - nearly one-third of the height of the Tower. Approximately three seconds after the initial hinging movement, the demolition of the lower part of the South Tower began in earnest at the 80th floor. It began with a series of outward bursts of propellant - observed as the horizontal expansion of a cloud of dust and debris that was much lighter in color than the dark smoke from the fires in the burning tower. The ejection of many exterior structural elements - some traveling for great distances were observed.

A new analysis describes one of the most interesting objects is a large wall section that appears to span nearly the entire width of the Tower which was seen "surfing" its way into oblivion. Because of the low resolution in most older YouTube videos, these features were thought to be core columns. However, in reviewing the more detailed versions available through NIST's FOIA Releases they are clearly seen to be perimeter column sections with the horizontal connecting spandrel plates plainly visible. Additionally, the video captures the stationary, standing core structure immediately after the perimeter wall and office areas were propelled away from the core. The video has sufficient resolution to reveal details of the surviving structure.

Figure 1: Eight or more contiguous perimeter column sections are seen propelled (left) from their initial location near the 80th floor (right). At this point, they have traveled over 200 feet from the South Tower wall.
(Image by Dean Reviere via NIST FOIA with annotations by Wayne Coste)   Details   DMCA

Figure 1 shows a screenshot from the video known as, "Skidmore, Owings & Merrill - from Dean Reviere," where the connecting horizontal spandrels are clearly seen. Figure 2 shows a portion of the east face of the South Tower, and provides a more precise identification of the perimeter column sections, shown in Figure 1.

Figure 2: Initial location of expelled perimeter column sections in the east face of the South Tower (left) and estimated identification as they were propelled (right). Solid colors indicate columns that were observed in the video while outlined columns
(Image by Dean Reviere via NIST FOIA with annotations by Wayne Coste)   Details   DMCA

Analysis, using a video (WTC2 'Collapse' - Onno deJong) that captured the movement of these perimeter columns from a location at 1st Avenue & 9th Street, shows that these perimeter columns originated from near the 80th floor (see Figure 1, right) and had traveled approximately 2.27 seconds before the columns "out-ran" the cloud of propellant, fine dust and debris. When these columns emerged, they had been propelled nearly 200 feet away from the east face of the South Tower and had been accelerated horizontally to a velocity of approximately 80 ft per sec (54 mph). Additionally, the trajectory of these perimeter columns shows there was no initial component of velocity in the vertical direction (e.g., no initial 'kick' in the direction of gravity).

Figure 3 shows these "surfing" perimeter columns from two perspectives that are approximately 90 degrees apart after about 6.25 seconds after the tilting began. Figure 4 shows the location of the top of these perimeter columns in 1/3 of a second intervals. These locations were used to quantify the velocity and acceleration of these columns.

Figure 3: Location of the 'surfing' columns from the southeast (left) and the northeast (right) at 6.25 second after the hinging motion begins.
(Image by Onno DeJong via NIST FOIA with annotations by Wayne Coste)   Details   DMCA 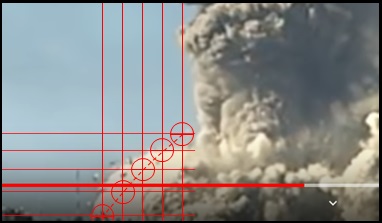 Related Topic(s): 911; 911 Destruction; 911 Truth; Architects And Engineers For 911 Truth; Demolition; Fire Fighters For 911 Truth; NIST; World Trade Center, Add Tags
Add to My Group(s)
Go To Commenting
The views expressed herein are the sole responsibility of the author and do not necessarily reflect those of this website or its editors.