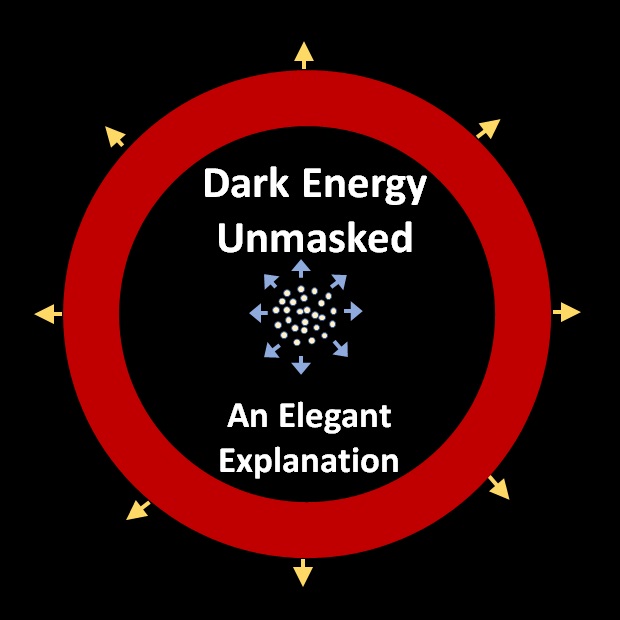 Dark Energy Unmasked
(Image by Wayne H. Coste, BS-EE, PE, IEEE-SM)   Details   DMCA
Today, two of the greatest mysteries remaining in cosmology, the science of the origin and development of the Universe, are called Dark Matter and Dark Energy. Dark Matter appears to be some sort of matter that only interacts with ordinary matter by gravity while Dark Energy is a theoretical repulsive force that counteracts gravity and causes the Universe to expand at an accelerating rate. This article is the first in a series and will address the issue of Dark Energy and how it can be explained as a natural outcome of Einstein's Field Equations and treating the Universe as a closed system. The treatment of this topic will be presented as a philosophical discussion in which no equations will be harmed.

Since the 1990s, Dark Energy has been the most accepted explanation for the unexpected observation that the expansion of our Universe is accelerating instead of decelerating. It had been expected that the gravitational attraction of matter, both ordinary matter and Dark Matter, would slow the expansion of the Universe - possibly with enough attractive force to cause a contraction. However, the opposite was found and no theoretical explanation has emerged to explain the observed acceleration - and as a place holder, Dark Energy was hypothesized to be a new form of repulsive energy.

However, it appears that a simple and elegant explanation is available to explain Dark Energy. The concepts underlying this explanation have been presented in numerous books and lectures on Astronomy and Quantum Mechanics with only a few insights added to "connect-the-dots". Given the evolution of the study of cosmology there are reasons why the true nature of Dark Energy has eluded numerous researchers over the last quarter century. From the author's observations, the primary reason is that the current theoretical model of the Universe, known as the Λ Cold Dark Matter Concordance Model, is incomplete because it treats the Universe as an open system at the largest scale (NOTE: ΛCDM Concordance Model where "Λ" is the "cosmological constant" that is added as an after-the-fact expansion term).

The history of science has shown the value of an accurate working model for a phenomenon, or process. Without a conceptual model of the atom, alchemists did not have an understanding of how materials interacted. Consequently, their efforts were impeded by numerous wrong assumptions and dead-ends. With the development of the Rutherford model of the atom in the early 1900's, advancements in physical chemistry were able to evolve at a rapid rate.

The Universe as a Closed System vs. an Open System

One of the questions that has been posed when asking experts about the accelerating expansion of the Universe is: "couldn't there be other universes 'out-there' that are gravitationally attracting 'our' galaxies toward them?" To which the reply can be characterized as, "nothing with sufficient gravitational attraction has been observed 'out-there'".

However, there is something 'out-there' which is inextricably linked to the Big Bang and has been overlooked since the beginning of the Big Bang hypothesis. The current ΛCDM Concordance Model views radiated energy as something that travels outside of the observable Universe and is gone forever with no effect on the remaining observable Universe. Under this precept, the Universe is treated as an open system with a large fraction of the initial energy neglected. It is easy to understand this perspective because we can only see radiation that is reflected into our sensory systems - whether biological senses or instrumentation systems. Such a limitation on observability appears to have created a literal blind spot that has impeded the development of a comprehensive model of the Universe.

Furthermore, this blind spot also originated because the initial emphasis of cosmology was on the creation and evolution of visible matter in the Universe which, according to the ΛCDM Concordance Model, is now acknowledged to account for only 5 percent of the total matter and energy. In the standard Big Bang model, the formation of matter is known as nucleosynthesis. In nucleosynthesis, the role of radiant energy - photons - was primarily viewed as an intermediary energy transfer step between particle-particle creation and particle-particle annihilation until the temperatures cooled to 1013 degrees Kelvin at which time only a sea of photons remained. By the time the temperatures dropped to 1010 degrees Kelvin, the photons had insufficient energy to create electron-positron pairs and they then vanished from the nucleosynthesis discussions.

Of course, the photons themselves did not vanish, but rather they were assumed to remain contained within a hot ionized fog of the evolving Big Bang until 379,000 years later when recombination (e.g., "time of last scattering") freed them to expand outward into a sphere of radiated energy which is the source of today's Cosmic Microwave Background.

Accounting for all the Mass, Energy, Momentum, Pressure and Tension

In general relativity mass, energy, momentum, pressure, and tension all act as sources of gravity and these tell space-time how to curve. In the formulation of general relativity these components are embodied in the physical quantity known as the energy-momentum tensor of Einstein's Field Equations. The energy contained in the departed photons emitted from the initial Big Bang and up to the present has been left out of the energy balance of our Universe. This omission is important because Einstein's Equations demand the conservation of energy in all its forms as defined by this energy-momentum tensor.

While neglecting the energy in these departed photons may have been appropriate when studying nucleosynthesis, this omission left a gap in the model that physicists used both to understand new data and to make predictions. With this gap, it was not possible to conceive of an explanation for the accelerating expansion of the Universe. To fill this gap, the role of the energy in these photons needs to be revisited.

Going Back to the Beginning

Figure 1 shows an open system framework in which radiated energy leaves the Universe and is gone forever. However, this unseen outwardly directed radiation has been traveling outward since the Big Bang. 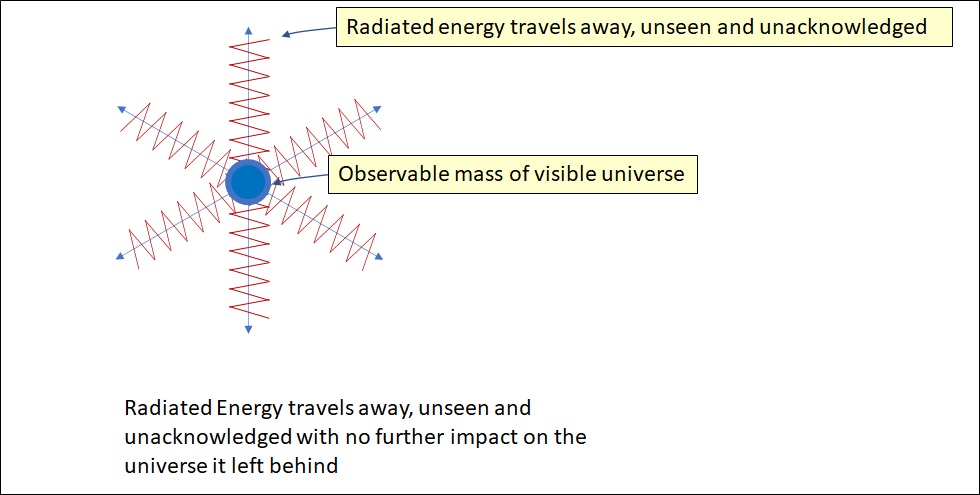 Figure 1: The 'Open' Universe framework neglects radiated energy which travels away, unseen and unacknowledged with no further impact on the Universe it left behind.
(Image by Wayne H. Coste, BS-EE, PE, IEEE-SM)   Details   DMCA

Related Topic(s): Cosmology; Dark Energy; Einstein; Energy; Energy; Universe, Add Tags
Add to My Group(s)
Go To Commenting
The views expressed herein are the sole responsibility of the author and do not necessarily reflect those of this website or its editors.

STAY IN THE KNOW
If you've enjoyed this, sign up for our daily or weekly newsletter to get lots of great progressive content.
Series: "Coste Cosmology"