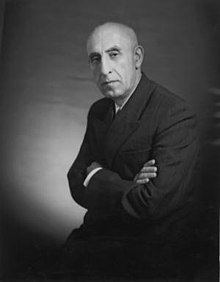 A non-scientific poll of 5000 people in four different Western countries over a period of several years, proved that 99.9% of them have not heard Mossadegh's name nor cared about who he was.

Mohammad Mossadegh was an Iranian politician who served as the 35th Prime Minister of Iran, holding office from 1951 until 1953, when his government was overthrown in the 1953 Iranian coup d'e'tat orchestrated by the United States' Central Intelligence Agency and the United Kingdom's MI6.

There are hundreds if not thousands of sources how Western countries brought down the Prime Minister of Iran.

All the Shah's Men: An American Coup and the Roots of Terror in West Asia (Sig), by Stephen Kinzer

Western citizens remain ignorant of the role(s) their governments have played in overthrowing various governments.

Countercoup: The Struggle for the Control of Iran by Kermit Roosevelt, Jr.

This book gives inside details on the 1953 CIA overthrow of the elected Iranian government. Kermit Roosevelt was the CIA Director in charge of the operation (Operation Ajax) and was on the ground in Iran, running the operation with his agents. Kermit Roosevelt was allowed to write this book that the permission would not have been given to anyone else. This action influenced the Western countries in future clandestine operations, not only in the West Asia, but also in Latin America. The Ajax operation killed democracy in Iran, for a long time. Roosevelt rudely writes out why and how he conducted this operation.

Secrets of History: The CIA in Iran, from the New York Times

After 70 years later, Iranians are not hopeful that Western countries will stop interference in the internal affairs of their region. Killings, lootings, destructions will continue even under new President.

It will be very hard for Western countries to accept a strong yet independent Iran. However, Iranian missiles have brought peace to the Persian Gulf.

People are afraid. Overthrowing regimes and changing the UN recognized names and the geopolitical maps will not stop. It seems to me this is long term policy going back to British Empire. The accent on long-term structural relationships, but this rhetoric only concealed a short-term opportunism of the kind revealed by the invasion of Iraq and Afghanistan (the longest war in history)

Iran's Nuclear roots? See Atoms for Peace, where starting in 1957 the USA provided the Shah of Iran (after overthrowing Mossadegh in 1953) nuclear technology. Iran was and is a member of IAEA, NPT, and the UN, JCPOA gave it fewer rights. Iran must NOT accept to return to JCPOA because it violated all international accords.

Related Topic(s): Government; International; Iran, Add Tags
Add to My Group(s)
Go To Commenting
The views expressed herein are the sole responsibility of the author and do not necessarily reflect those of this website or its editors.