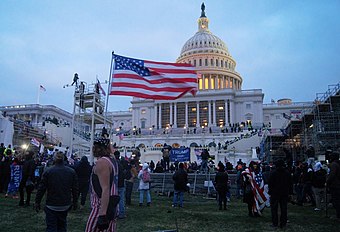 What took place in Washington, D.C., on January 6, 2021, has increased the fear among millions of world citizens.

Intelligence agencies have (as in Vietnam and Iraq) provided Presidents with false information that were used as pretexts to attack perceived adversaries. In 2020, several actions such as assassinations were used to provoke the adversaries into some response to justify retaliation which in many cases have brought millions of death and property destruction(s).

The assassination of Mohsen Fakhrizadeh, in November 2020 was probably intended to be a provocation. If so, it has failed so far.

Who gains from killing people by Western countries?

There is this flaw within the Western system(s) that how democratic they are, there are serious international security threat to world peace. This is a worldwide problem that need to be addressed by some leaders. In my view, German's Chancellor, French and Russian Presidents should not be allowed to participate to come up with a multinational framework because of their past history of killing people and stealing weak countries' lands, for example to create a fake Azerbaijan. Fake Azerbaijan with support from Turkey have killed many Armenians and violated international laws while many United Nations members have remained silent.

No more Western leaders saying killing people was justified, among them half million children were deprived of medicine and food which resulted in their death. Tony Blair was another leader who justified killing people.

It is ironic that Madeleine Albright was bestowed the Medal of Freedom by President Obama who imposed more illegal sanctions in comparison to previous American Presidents.

Illegal sanctions on many countries especially during this Coronavirus pandemic should be lifted.

Not until Ed Snowden exposed in June 2013, domestic spying programs existed by large Technology Corporations for massive personal data collection mechanism(s). The argument that they are private companies is a lie. These corporations are a part of Western system(s) apparatus to carry out and control the natural resources of many nations.

Related Topic(s): Fear As Policy; World Bank; World Economic Forum; World Issues, Add Tags
Add to My Group(s)
Go To Commenting
The views expressed herein are the sole responsibility of the author and do not necessarily reflect those of this website or its editors.