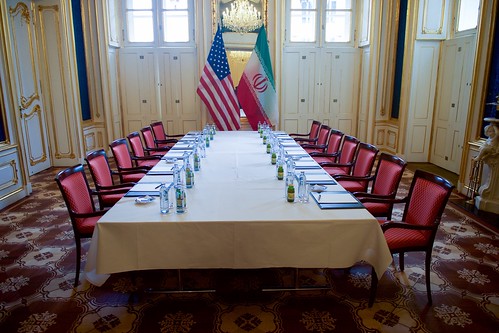 When the US breaks every treaty and deal it has ever made, then what is the point of talks?
(Image by U.S. Department of State)   Details   DMCA

Recent G7 meeting in France and France's President trying to mediate further negotiations has worried many people in the world (not only in Iran) that hegemonic powers are back at their old tricks.

The crucial question should be why the problems in France over many issues such as Yellow-Jackets have been ignored for which Western countries would have tried bombings and regime change and more sanctions in other countries?

Since late 1950s, Iran invested in the Western economies and companies. When difficulties with the West started in 1979, Iranian assets were frozen. The Iran nuclear deal (P 5 +1) , unfroze a small portion of Iranian assets.

The P 5 + 1 known as the Joint Comprehensive Plan of Action included Iran, and the United States, China, France, Germany, Russia, the United Kingdom and the European Union which gave Iran fewer rights since Iran was a member of IAEA and NPT and many false promises. Western countries did not deliver any of their part(s) and now they want to renegotiate. What is there to negotiate further?

In return for the lifting of sanctions, Iran agreed to dismantle its fission materials production for 10 years. (According to the UN watchdog Iran has been compliant.)

Iran did not receive the $150 billion "cash", but rather the net amount after obligations against the frozen assets were satisfied were much smaller. Some sources estimate the actual amount received was in the range of $25 - $50 billion. No place has mentioned that the US businesses and organizations received a sizable amount in the range of $100 to $120 billion from the frozen Iranian assets. Western media has been quiet about this fact. One indicator has been the US courts giving millions of Iranian frozen assets to whoever submitted a claim against Iran. Even one Judge claimed he was wrong in his decision (Judge presiding over Betty Mahmoody's case gave all his belonging including his house in his only name away which was unprecedented in US legal courts). There are thousands of other cases.

The $1.7 billion in "cash" (Dollars and Euros) was a different story and unrelated. Iran had placed $400 million on deposit for aircraft purchases before its 1979 revolution by Iranian government, but never received the equipment. The World Trade Court ruled that this money must be returned to Iran, denominated in the same ratio as it was received, and with interest. The interest came to $1.3 billion over 25 years at 6% (the usual legal standard for interest.) It was never America's money. It always belonged to Iran just as the frozen assets did.

The Joint Agreement of P 5 +1 was a brilliant move to excite the world population. In some views, it was NEVER about Iranian nuclear programs or the nuclear bomb(s). What Iran was going to do with one or several nuclear bombs against 100s or even 4,000 nuclear bombs which other countries have? The agreement's logic does not accept the nuclear to be the main issue. Constant monitoring of Iran's nuclear facilities kept sharp eyes on material production. Iran delivered its part of the agreement Western countries did not.

The P 5 +1 negotiation was to freeze Iran's nuclear program while allowing Turkey to keep 90 nukes, Pakistan to keep around 200, and Saudi Arabia to have around 20-30 nukes parked in Pakistan. In some estimates, the entire Pakistan's program was financed by Saudi Arabia.

The US withdrew from the nuclear agreement, even though there was no evidence that Iran was not in compliance. All the other signers, the UK, Russia, China, Germany and the EU did not impose further sanctions as the US did. These members did not deliver their part of agreement(s). Now they want further negotiation(s). Negotiations for what? What is there to negotiate?

The USA withdrawal from several other agreements, treaties, and pacts has proven that a few countries were singled out. Western countries should not be trusted for any new agreement. There should be no new negotiation(s).

From 2017, the new negotiating approach is what has been called hardline. The USA makes demands, and has the economic and military tools to do this, and then at the negotiating table it searches for a better 'deal' with threat of more restrictions and sanctions. The majority of UN country members have demonstrated not to have any strength. They have not been able to vote independently.

No President - not Reagan, nor both Bush, nor Clinton, or even Jimmy Carter - thought the money the Shah paid as deposit for military weapons or investments in such companies as Pan Am belonged to America. The world learned a new lesson that one way to keep foreign investments in Western countries is to bankrupt the Western corporation(s).

Western media is at fault for broadcasting false statements to affect public views.

Related Topic(s): Agreement; Agreements; Iranian; Negotiation; Nukes, Add Tags
Add to My Group(s)
Go To Commenting
The views expressed herein are the sole responsibility of the author and do not necessarily reflect those of this website or its editors.