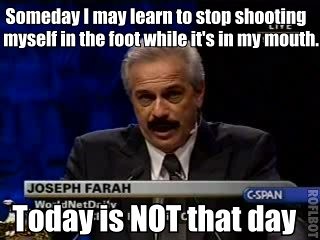 Joseph "Mr. Mustache" Farah, the crusading editor of World Net Daily, has spent 35 years in journalism. I know this because he likes to remind people of this fact whenever they question his motives or methods. He also likes to beat people over the head with it when he thinks they've done him wrong -- usually by belittling his works, or else saying something about him that isn't true, even if it is.

Case in point: back in March, Mr. Farah got very red under the collar when Newsweek had the utter temerity to list he, himself, as an actual Birther.

You will note that I am one of those identified by Newsweek as a proponent of this "conspiracy theory."

That statement is categorically untrue.

While I have written tens of thousands of words about the subject of Barack Obama's eligibility and talked for dozens of hours on the public airwaves and given hundreds of interviews on this subject, never have I stated that Obama was not born in the United States.

At the time, I had my good friend Batman expound on the issue. He and his two-fisted ward came to the conclusion that, given all those tens of thousands of words on the subject Mr. Farah had written at that time, it seemed highly unlikely he was a simple, passive observer of an issue, just seeking an answer for the sake of journalism. In fact, during the resulting fisticuffs with the Riddler, he shorted it down to a simple axiom that even the villain's Devo knock-off henchmen could understand: "If it quacks like a duck..."

That said, Newsweek felt the need to make a small retraction of sorts, however backhanded. No lawsuit materialized. People had a laugh at his expense. Life went on.

However, in a clear example of how even the best act eventually slips, Joseph Farah's non-birther mask finally fell to the floor, almost a full year later.

The revelation came in his most recent column at World Net Daily, entitled "Meet the Real Non-Birthers" -- another steaming pile of anti-Obama poo that Mr. Farah apparently feels contractually obligated to manufacture in the search of truth, justice, and more readers. As with most Farah specials, the facts are questionable, the conclusions shaky, and the self-congratulatory martyr act just this side of nauseating.

(Case in point: he claims "I have yet to see one "birther" on television hurling ad hominem attacks at "non-birthers," though I see the opposite on a daily basis." He must have missed Orly Taitz calling people "brownshirts," or the Reverend Manning calling Clarence Page the other N-word for dissing the issue. Maybe he doesn't watch the Reverend's video messages, but he could not have missed Orly unplugged, surely.)

But the real jaw-dropper is when he lets fly with the following:


Since there is no dictionary definition to (birther), it has been used as a term of derision and dismissal. Often you will see "news stories" defining "birthers" as people who hold fast to the notion that Obama was foreign-born. Actually, most skeptics about Obama's eligibility simply want to see evidence to support the contention that he is actually a "natural born citizen," as required by the Constitution.

The historic understanding of that concept is simply this: To become president of the United States one needs to be born in the U.S. to citizen parents with no divided loyalties. Obama tells us that he was born in Hawaii to a Kenyan citizen and a mother too young to confer ordinary citizenship upon him -- a status that would have made him, at best, a dual citizen at birth and, possibly, a non-U.S. citizen. Further complicating the problem, there is no proof he was actually born in Hawaii.

Read all that again, especially the second paragraph.

While it is essentially true that there is no dictionary definition of Birther, the current trend is to apply it to anyone who believes that the circumstances of Barack Obama's birth make him ineligible to hold the office of the President.

This covers those who think he was not born in America, as well as those who think (incorrectly) that: a Natural Born Citizen must be born to two US Citizens; his father's non-citizen status and/or dual-citizenship makes Obama ineligible; his father's dual-citizenship was passed on to Obama at birth, making him ineligible; Obama's mother wasn't old enough when he was born; etc.

Related Topic(s): Birthers; Eligibility; Joseph Farah; Journalism; Newsweek; Obama, Add Tags
Add to My Group(s)
Go To Commenting
The views expressed herein are the sole responsibility of the author and do not necessarily reflect those of this website or its editors.