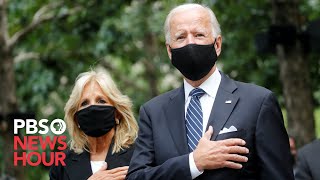 That's absolutely not the case in 2020 - politics is not at all a "science", of course.

The most important issue in the US today is, incredibly, largely banned from corporate media discourse: Has Joe Biden become too senile to be president?

This is the first topic anyone brings up whenever I ask them about Biden, proving that the intelligence of the average American is too often unfairly denigrated: it should indeed be unthinkable to vote for someone who has been unfortunately beset by old-age dementia. The nation's highest office cannot be held by someone who can be easily manipulated or who needs to be told what to do.

Despite the fact that everyone here is taking about Biden's mental health, the MSM and 1% is trying to make it seem like this is just another Russian disinformation campaign.

The denizens of "the Swamp" have controversially insisted for four years that Trump was "unfit for office" - ironically, the 2020 debates will be so unprecedentedly critical because they could shockingly prove that their own candidate is indisputably unfit.

Biden certainly shows very worrying signs of having aged out of civil service. It's well-known that he has to overcome a regular stutter, but Democrat partisans foolishly believe that the average voter can't tell the difference between a stammer and serious cognitive decline.

At the Democratic National Convention everyone watched Biden's speech with baited breath - not because he is such an inspiring candidate but because many expected a mental car crash due to his rumoured senility. I thought his speech was delivered in an incredibly grim manner - he was obviously concentrating like mad just to correctly read the teleprompter, which necessarily excluded the space for inspiration and emotion.

Related Topic(s): Biden Harris, Add Tags
Add to My Group(s)
Go To Commenting
The views expressed herein are the sole responsibility of the author and do not necessarily reflect those of this website or its editors.