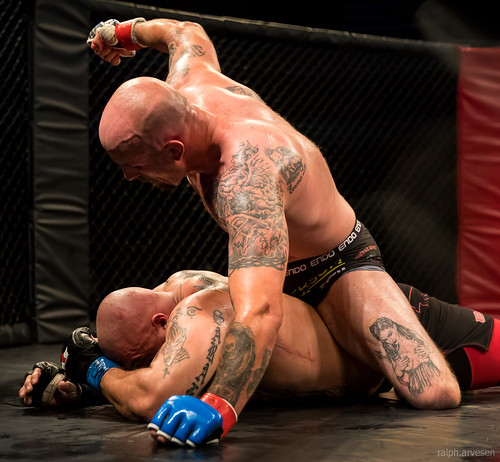 Having just gone through part 2 of Mother Nature's Shock and Awe one can only minutely comprehend what our Shock and Awe carpet bombing did to the citizens of Iraq, Afghanistan and Libya.

When Hurricane Mathew ripped a pine tree from its middle and flew it through the roof of our home (with us in it) last October, the impact sounded and felt as if a bomb was dropped dead center. The fear of that situation, nearly one full year ago, still causes panic attacks in my wife. Imagine what those poor souls in the aforementioned countries went through when our pre-emptive violence reached their doors.

Amerika has, with each and every decade of my baby boomer's life, become more and more violent as a culture. One can look at the sports world to see the analogy. For the past perhaps 15 years (right in line with the 9/11 tragedy followed by our Shock and Awe upon Iraq) MMA or ' Mixed Martial Arts' has gotten more and more popular, superseding traditional boxing. Now we who follow ' The Sweet Science' realize that boxing has always been a sport replete with a more controlled violence, what with the padded gloves and watchful referees (we hope at times). MMA is ten times more violent, with the use of kicking and wrestling in addition to punching. Unlike the larger and safer boxing gloves, MMA uses little gloves that allow for lots of damage when they hit flesh. I mean, these guys really go at it, similar to the many bar fights I witnessed as a youth.

Obviously, MMA participants are very trained and disciplined athletes... but violent as hell! Yet, the ratings for this (so called) sport, with the appropriate name of Ultimate Fighting, are going through the roof!

As far as Amerika's real sports pastime, professional football, the peons watching it, as with UFC fans, just seem to love the violence of the hitting. It has taken decades for our prostitute-media to finally cover the story of just how dangerous football has become. Having played the game in college for four years, this writer can attest to the change in the game around 1970 when the use of the head, or snoot as they called it, became an acceptable way to both tackle and block someone. Before that, we were taught to use the shoulder rather than the head. The abundance of brain injuries from this ' caveman ' manner of playing football has finally ' come home to roost'.

Here's the kicker: When you have a nation that uses such violence on so many civilians in phony wars and foreign occupations, the Trickledown effect takes root. Look at how many of our young soldiers return home from using violence in our myriad of phony wars to then become violent to others.

Sadly, from Vietnam to the present, for other veterans powerful drug addiction becomes a means of escaping the nightmares of the violence done or witnessed overseas. What this Amerikan exceptionalism has also accomplished is on the mindset of too many of our people. It becomes almost normal to offer or conduct violent actions upon others who 'get in our way'. Road rage is an example of this phenomena.

In the old days, we all would 'flash the middle finger' or yell out a f-you to vent our anger. Nowadays, the gun is the means of such reaction. You don't need the results of studies to prove this fact. Amerika is violence personified!

Amerikans exhibit violent urges due to knowing they are being screwed by this Military Industrial Empire. Unfortunately, their anger is misplaced. Look at how many low income white Americans chose to stand on street corners with Trump signs in hand, or on their vehicles and homes during the 2016 campaign. Imagine doing this for some super-rich man who is as out of touch with them as was his opponent. Yet, it was their anger at ' The System' that led them to grasp at the straws Trump offered. As with Mrs. Clinton and others from this two party con job, so many of our fellow Amerikans still believe in being rescued from the Abyss by the very people who created it. This goes for the white supremacist movement that is being renewed once again by the far right in our nation. They too have this innate anger misdirected as usual. Their anger should be directed at the super-rich few who have caused the economic turmoil in their lives. Scapegoating Jews, Muslims, Blacks and the undocumented will never get to the root of their inner rage.

The only interesting thing that occurs when a hurricane strikes is the unbiased results it brings. Natural disasters play no favorites. They destroy the homes of the super-rich and the poor equally. Yes, the super-rich may have better protections from the storms, but when they are as violent as Katrina, Sandy, Harvey and Irma, the damage is tremendous. Perhaps, though, if our foolish and selfish leaders and their corporate sponsors did not spend over half of our tax revenues on military spending, instead directing it for a viable safety net, the violence of Mother Nature would be tempered a lot. Maybe we here at home are feeling the Karma or ' Blowback ' as the late author Chalmers Johnson labeled it, of the violence we conducted overseas for so long . After all: Violence begets....

Philip A Farruggio is a son and grandson of Brooklyn, NYC longshoremen. He has been a free-lance columnist since 2001, with over 300 of his work posted on sites like Consortium News, Information Clearing House, Nation of Change, World News Trust, Op Ed News, Dissident Voice, Counterpunch, Activist Post, Sleuth Journal, Truthout and many others. His blog can be read in full on World News Trust., whereupon he writes a great deal on the need to cut military spending drastically and send the savings back to save our cities. Philip has an internet interview show, ' It's the Empire... Stupid' with producer Chuck Gregory, and can be reached at paf1222@bellsouth.net )

{Philip A Farruggio is the son and grandson of Brooklyn, NYC longshoremen. A graduate of Brooklyn College ( class of '74 with a BA in Speech & Theater), he is a free lance columnist posted on World News Trust, Nation of Change Blog, Op Ed (more...)
Related Topic(s): Blowback; Bombing; Military; Violence Prevention; Violence-War, Add Tags
Add to My Group(s)
Go To Commenting
The views expressed herein are the sole responsibility of the author and do not necessarily reflect those of this website or its editors.