Cross-posted from The Guardian
An Obama official seems to justify an Iranian attack on the US; Panetta channels Cheney; Tom Friedman writes from expertise 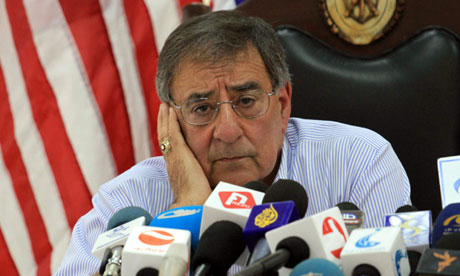 (Image by Unknown Owner)   Details   DMCA
Leon Panetta in Kabul, where he called on Pakistan to do more to crack down on militants. Photograph: S Sabawoon/EPA

There are several brief matters worth noting today:

1) It seems that a leading Obama official just endorsed the right of Iran to attack the US and Israel:

"Cyberattacks can amount to armed attacks triggering the right of self-defense and are subject to international laws of war, the State Department's top lawyer said Tuesday.

"Spelling out the US government's position on the rules governing cyberwarfare, Harold Koh, the department's legal adviser, said a cyber-operation that results in death, injury or significant destruction would probably be seen as a use of force in violation of international law.

"In the United States' view, any illegal use of force potentially triggers the right of national self-defense, Koh said ...

"In our view, there is no threshold for a use of deadly force to qualify as an 'armed attack' that may warrant a forcible response,' he said ... Koh also said that in responding to an attack, an action need not be taken in cyberspace, but it must be a necessary action and one that is proportionate, avoiding harm to civilians."

"From his first months in office, President Obama secretly ordered increasingly sophisticated attacks on the computer systems that run Iran's main nuclear enrichment facilities, significantly expanding America's first sustained use of cyberweapons, according to participants in the program.

"Mr Obama decided to accelerate the attacks -- begun in the Bush administration and code-named Olympic Games -- even after an element of the program accidentally became public in the summer of 2010 because of a programming error that allowed it to escape Iran's Natanz plant and sent it around the world on the Internet. Computer security experts who began studying the worm, which had been developed by the United States and Israel, gave it a name: Stuxnet ...

Of course, Koh's argument would only constitute a defense of Iran's right to attack the US if the rights claimed by the US applied to other countries, so there's nothing to worry about.

2) Nothing is more consistent than war propaganda, especially the propaganda aimed at the citizenry of a nation at war by its leaders. It simply never changes, no matter the war or the leaders:

Related Topic(s): Censorship; Cyberwarfare; International; Journalism, Add Tags
Add to My Group(s)
Go To Commenting
The views expressed herein are the sole responsibility of the author and do not necessarily reflect those of this website or its editors.