[Simon Bolivar, El Libertador, Early 19th century South American who, along with Jose de San Martin, lead Latin America in the war of independence from The Spanish Empire. Bolivar is the symbol of Hugo Chavez's Bolivarian Revolution of the 21st century. Photo Wikipedia .]

"Racism is one of the main engines and expressions of the current counter-revolution. In Venezuela the revolutionary struggle to end white supremacy and for self-determination is slow, and complicated by white elites, backed by US imperialism, and by the denial of many that racism persists."Quote from Venezuelanalysis.com, "Racism Without Shame in the Venezuelan Counter-Revolution"

The US and Canada are not supporting "the return of democracy" in Venezuela as they claim. Instead, they are following in their shameful histories of colonialism, imperialism, exploitation, illegal wars of aggression, and overthrowing governments. They are crushing democracy in Venezuela by exploiting class and race warfare, being carried out by an elite white-supremist minority against the poor, Afro-Indigenous, and other Venezuelans of color.

A white-minority has dominated commerce and politics in Venezuela since the days of slavery in the 19th century. Venezuela had slavery, just as did the rest of the Caribbean and Latin America. Slavery went back to the early 16th century Spanish conquistadors. More abducted Africans were trafficked to the Caribbean and Latin America, than to the USA. 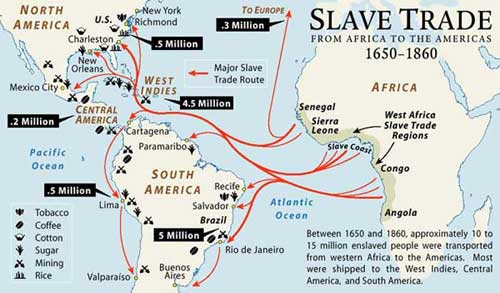 Slavery was officially abolished in all of the Americas in the 19thcentury. The history of slavery in the Caribbean and Latin America has left a legacy of prejudice, discrimination and class conflict, which has largely gone unresolved.

Different skin complexions of Latin Americans are due mostly to various mixtures of European, Spanish and Indigenous bloodlines. The darker the skin color, along with other ethnic features, the more there is of discrimination in education, employment, and opportunity. Discrimination against blacks and people of color perpetuates poverty and class conflict. In Venezuela, as elsewhere in the Caribbean and Latin America, political power, commerce and wealth is largely in the hands of a minority of upper-class elites, whom are mostly whiter and lighter than those with darker skin complexion.

One can get a sense of how much class and race affect Latin American society by watching Spanish language movies and soap operas. Below are just two examples: the setting for the TV series "The White Slave" is 19th century Columbia; and the setting for "Teresa" is contemporary Mexico.

Hugo Chavez and his successor Maduro are exuberantly despised by the elite white-supremacist minority. They still call Chavez negro, savage, monkey and ape. Maduro gets the same; and the media never fails to remind the public that he was a former bus driver, which is code for "low-class". Maduro is proud of his humble beginning as a bus driver and his Afro-Indigenous ethnicity. Chavez was proud of his poor Afro-Indigenous background too, and his final resting place is in the barrio where he and Maduro came from.

In 1998 the elite white minority was voted out of the presidential residence Miraflores Palace. Instead of being purged by Chavez, as an authoritarian dictator would have done, the elites maintained their political power base, dominance in commerce, and control of the media. They have been trying to get back the Miraflores Palace, and indignantly consider it their birthright. They have used every means at their command, and even invited the US to invade the country, which would result in thousands of deaths.

In April 2002 the elite white minority tried a coup against Chavez, backed and financed by the US, which failed. In December 2002 they tried a strike by the management at the Venezuelan oil company Petróleos de Venezuela. They tried a recall referendum against Chavez in 2004, and lost at the polls. They tried to unify the opposition political parties with the sole purpose of defeating Maduro in 2013, and failed. They tried to delegitimize the 2018 presidential election by organizing a boycott. They tried to assassinate Maduro with a drone in 2018. Their attempts have failed.

The white elites have sabotaged the economy, used mass demonstrations, and organize violence. The self-appointed Juan Guaido declared himself the interim president, and called for a military coup d'etat, that failed miserably. Even with their control of the media and commerce they have failed to oust Maduro.

The elite upper class has millions of dollars of financial support from the US and Canada. Some of the EU countries, following pressure from the US, have thrown their support behind the Guaido coup plotters. The UK froze $1.2 billion of Venezuela's much needed reserves for life-saving food and medicine. Spain turned its back on the people of Venezuela, too.