Venezuela has the largest known reserve of oil in the world, and Venezuela controls its own oil, not international corporations; and it uses its oil for the benefit of its people. The U.S. Empire instead wants to control that oil and it wants the profits from the oil to go to U.S. oil corporations, especially ExxonMobil. Everything else one hears now about Venezuela is prologue or epilogue. The main plot is about the oil.

The first scene opens with protesters screaming and yelling in the streets of Caracas. Barricades are blazing, people are choking on the smoke, and their eyes are red from teargas. Traffic is backed up for miles. It is chaos. The streets are filled with anti-government protesters, and out of sight of the mainstream media cameras are pro-government supporters. Most of the violence one sees and hears about is from the anti-government protesters, but mums the word about that from the mainstream corporate media. The mainstream corporate media is the Fake News, it is the propaganda horn for the U.S. Empire and those that really control what happens in the world. 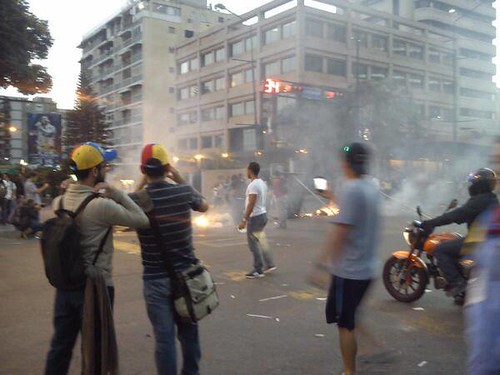 There is blood in the streets of Venezuela, and overhead the U.S. Empire regime change vultures are circling. In the United Nations, in the Organization of American States, in the Oval Office of the White House, on the floor of the U.S. Congress, and in the Fake News people are seen wringing their hands about human rights and democracy. Tucker Carlson on Fox News is reporting about the failure of Venezuela's socialist government:

""there is no toilet paper or meat there, the currency is worthless, the murder rate is perhaps the highest in the world, the Supreme Court has tried to abolish the entire legislature for daring to oppose a dictator who's running the place into the ground, and you can go on and on and on, it is a disaster there in Venezuela."

Behind Tucker there is a scene playing. It is showing young people, all of them anti-government protesters, many wearing masks one supposes to protect their identity from what we are supposed to believe are government thugs. The protesters are throwing rocks, one supposes at government security forces. A water cannon sprays the protesters and they disperse to get away from it. Groups of protester run back and forth in the street, it is chaos, smoke is everywhere. What is it all the chaos about? The Fake News says it is all about democracy, the economy and human rights violations from a tyranical government. It isn't.

Related Topic(s): Anti-government; Oil; Propaganda; Sanctions; Venezuela Oppositions Terrorism; Venezuelan Foreign Minister Delcy Rodriguez, Add Tags
Add to My Group(s)
Go To Commenting
The views expressed herein are the sole responsibility of the author and do not necessarily reflect those of this website or its editors.