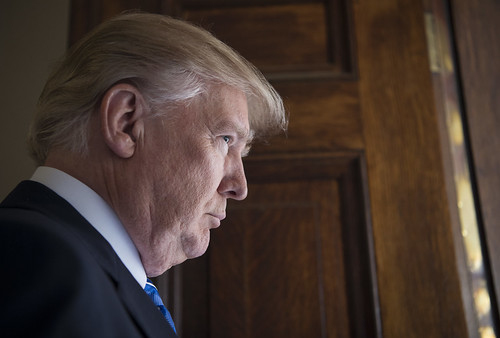 170529-D-GO396-0802
(Image by Secretary of Defense)   Details   DMCA
Sen. Bob Corker (R-TN), chair of the Senate Foreign Relations Committee, said in public what many of his colleagues have been muttering in private: the President's reckless public statements and tweets on foreign policy threaten world peace. For example, in his first speech to the United Nations, Trump warned that if the U.S. "is forced to defend itself or its allies, we will have no choice but to totally destroy North Korea. Rocket Man is on a suicide mission."

As Corker noted, this is the sort of language that could set the nation "on the path to World War III." It's a genocidal threat combined with a schoolyard insult. Just the sort of talk that could set off 33-year old paranoid dictator Kim Jong-Un, from a 71-year old who can't act like an adult, let alone sound like a head of state.

After Secretary of State Tillerson announced on Sept. 30 that he was in direct communication with North Korean officials, Trump tweeted that Tillerson "is wasting his time trying to negotiate with Little Rocket Man," and added: "Save your energy Rex," followed by a threatening hint: "we'll do what has to be done!"

The desperate meme now echoed among pundits is that a small circle of sane advisors can buffer Trump's hissy fits and pre-digest information to accommodate his limited attention span. Or, as in Corker's tweet: "I think Sec. Tillerson, Sec. Mattis and Chief of Staff Kelly are those people that help separate our country from chaos." We're supposed to be relieved that what stands between us and "chaos" is dedicated minders in a White House that "has become an adult day care center."

Before we feel relieved, let's remember that Trump and the rest of the world now know that Tillerson, frustrated at Trump's deep ignorance of military and foreign affairs, has called him a "f----ing moron." If you were Trump, would you let someone who said this speak for you around the world, assuring allies and adversaries that he truly represents what the "f----ing moron" thinks?

Of course, Sen. Corker (R-TN) is retiring in 2018--he needn't fear getting primaried by some toxic billionaire and an increasingly rabid party base. He feels free to speak out while most congressional Republicans seem to value their reelection prospects more than national security.

In a fiery speech on Oct. 13President Trump heaped scorn on Iran and the Joint Comprehensive Plan of Action (JCPOA)--aka the "Iran deal"--which was signed in July 2015 by Iran and six world powers -- the US, UK, France, Germany, Russia, and China. In this agreement Iran accepted a major cutback in its nuclear program, drastically reducing its stock of enriched uranium and the number of its centrifuges below what it would need for nuclear weapons. It also accepted a rigorous inspection regime carried out by the International Atomic Energy Agency (IAEA). In return, Iran was relieved of damaging economic sanctions and $100 billion of Iranian assets held abroad were unfrozen.

Trump falsely claimed that "The Iranian regime has committed multiple violations of the agreement." In fact, the Associated Press points out, "Iran is meeting all of its obligations under the deal, according to International Atomic Energy Agency investigators, who noted some minor violations that were quickly corrected."

Nevertheless, Trump just knows that "the Iran Deal was one of the worst and most one-sided transactions the United States has ever entered into." Never mind that one of Trump's adult minders, Secretary of Defense Gen. James Mattis, supports the agreement. Just 9 days before Trump's speech, Mattis appeared before the Senate Armed Services Committee and responded to a question from Sen. Angus King (I-ME):

"Do you believe it's in our national security interest at the present time to remain in the JCPOA?"
"Yes, Senator, I do."

Trump said that if he cannot get additional sanctions placed on Iran and a renegotiation of the JCPOA, he will terminate the agreement despite the international consensus that Iran has complied with it. All six of the other signatories have said they will not renegotiate the agreement.

If the U.S. pulls out under those circumstances, why should any nation (including North Korea) trust the U.S. to keep its word? Especially after Trump's decision to withdraw from the 2015 Paris Climate Agreement. Only two countries have not signed the Paris agreement: Nicaragua, because it wanted a stronger agreement, and Syria.

"a pattern of need for admiration and lack of empathy for others. A person with narcissistic personality disorder may have a grandiose sense of self-importance, a sense of entitlement, take advantage of others or lack empathy."

His response to hurricane Maria is one of countless examples of lack of empathy and pathological need for admiration. At a televised appearance in devastated Puerto Rico, Trump said to a cheering crowd: "There's a lot of love in this room," and then began throwing rolls of paper towels into the crowd. Although a million people are still without drinking water, and 80 percent of the island without electricity, when asked by a reporter to grade his response, he said: ""I would give myself a ten."

Wherever Trump goes, he's accompanied by a military officer carrying a satchel (the "nuclear football") containing a communication device that would enable him to launch a nuclear attack. The protocol for this command does not call for debate, only authentication that the order comes from the President. How safe can we feel when a man who is so impulsive, narcissistic and ignorant can order nuclear war? Are we hoping for disobedience from the military?