"Nothing will say more about who we've become as a nation than if a torturer is allowed to head the CIA"
(Peter Van Buren, 2018) 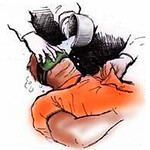 Waterboarding
(Image by Mike Licht, NotionsCapital.com)   Details   DMCA
How is this happening? Gina Haspel, Trump's nominee to head the CIA, is a war criminal, part of the circle of high-level members of the George W. Bush administration (including Bush himself and Dick Cheney) who directed a regime of torture during the early years of the so-called war on terror. It seems likely that there will be enough Democratic senate votes to offset the few GOP senators opposed to her confirmation.

In 2002 Haspel, known to CIA colleagues as "Bloody Gina ," was working for Jose Rodriguez, the man in charge of implementing the torture program at secret locations around the world. Her cable, "Turning Up the Heat in AZ Interrogations," recommended torturing Abu Zubaydah , whom the CIA was interrogating at a "black site" in Thailand.

Andrew Sullivan reported in New York Magazine (4/6/18) that, "Three months after [Haspel's]cable . . . Zubaydah was waterboarded 83 times. Haspel reported at one point that the CIA team conducted a 'dress rehearsal " which choreographed moving Abu Zubaydah in and out of the large and small confinement boxes, as well as use of the water board.'" As Raymond Bonner explains, the brutality was pointless "because he was not a member of al-Qaida, and had no knowledge of any plots against the United States."

Pro Publica has retracted its earlier report that Haspel was "chief of base" in Thailand while Zubaydah was tortured. But it and the New York Times affirm that she was in charge of the base during the subsequent interrogation of Abd al-Rahim al-Nashiri. He was waterboarded three times, left nude in a "standing sleep deprivation position with his aims affixed over his head," threatened with mock execution by pistol and power drill, confined in a coffin-like box, forcibly bathed and scrubbed on his anus and in his mouth with a stiff-bristled brush, and had his body forced backward in a kneeling position until he screamed.

In 2005, according to John Rizzo, (then) CIA acting general counsel, Jose Rodriguez and his chief-of-staff Haspel engineered the destruction of 92 videotapes of the interrogations of Zubaydah and al-Nashiri. They "were the staunchest advocates inside the [CIA] building for destroying the tapes," Rizzo wrote in his 2014 memoir, Company Man: Thirty Years of Controversy and Crisis in the CIA."On the edges of meetings on other subjects, in the hallways, they would raise the subject almost every week" (BuzzFeed NEWS,3/28/18).

Rodriguez and Haspel destroyed the torture tapes in violation of a court order and the repeated instructions of the Bush administration. Gina Haspel and Jose Rodriguez have gone unpunished despite committing war crimes and covering them up. Instead, Gina Haspel has now been rewarded with a nomination to head the CIA.

This 2007 campaign statement by Sen. John McCain shows how far we've sunk since the years following WWII: " ... following World War II war crime trials were convened. The Japanese were tried and convicted and hung for war crimes committed against American POWs. Among those charges for which they were convicted was waterboarding."

The UN Convention Against Torture was signed by Ronald Reagan in April 1988 and ratified by the United States in October 1994. Two of its provisions explicitly rule out the excuses that have been offered for Haspel's conduct:

Our ruling class is averse to prosecuting its members for crimes. During the eight years of the Obama administration, only one low-ranking Wall Street executive has been convicted for the widespread fraud that led to the financial crisis of 2007-08, the most severe since the Great Depression. No one at GM went to jail for knowingly selling cars with defective ignition switches that caused 124 deaths. And no high-ranking government official has been prosecuted for documented acts of torture in violation of international and U.S. law.

This indulgence toward upper-class felony contrasts with our swelling population of lower-class prisoners. On any given day we have 2.3 million people locked up, 80,000 of whom are in solitary confinement (arguably a form of torture). We have the highest incarceration rate in the world.

The rule of law means that every person, regardless of political or economic status, is bound by the same set of laws. It is the foundation of our constitution and of any just society. The rule of law is always vulnerable to the demands of rich and powerful people who believe they are entitled to impunity. Their demands are harder to deny when economic inequality is as extreme as it is in today's America. Billions of dollars in personal wealth translates into a great amount of raw political power. If these people regularly get their way, our society becomes fundamentally corrupt.

If we as a nation are not ruled by laws, then we are subject to the will of a powerful minority of billionaires and their elected servants. Lawlessness in government means being governed by force, by the threat of punishment from those who control our police and armed forces. Torture is perhaps the purest expression of the brutality of power unchecked by law--power wielded by a government that has lost its respect for those it governs.

It is a brutality which Donald Trump seems to savor. As he said on the campaign trail, "I would bring back a hell of a lot worse than waterboarding." It was entirely in character for him to nominate Gina Haspel.

Related Topic(s): Billionaires; Brutality; Bush; Crime; Government Corruption; Government Law-breaking; Inequality; Law; Prisoners; Punishment; (more...) Torture; Waterboarding; Zubaydah, Add Tags  (less...)
Add to My Group(s)
Go To Commenting
The views expressed herein are the sole responsibility of the author and do not necessarily reflect those of this website or its editors.