Answer: Plenty, if it's "Trump." On Jonathan Swan's historic Axios/HBO interview (8-4-20) Trump was asked what he thinks about the state of the pandemic at this time. "It is what it is," he said. Golly gee. Indeed, setting forth his state of mind about this rampant infectious disease that is ravaging the nation of which he is the putative Chief Executive, Trump actually told the truth for once. He uttered a phrase that is going to go down in history as one of the most prominent ever made by any President. Translation: "It's out there, you know, and there is really nothing I can do about it." 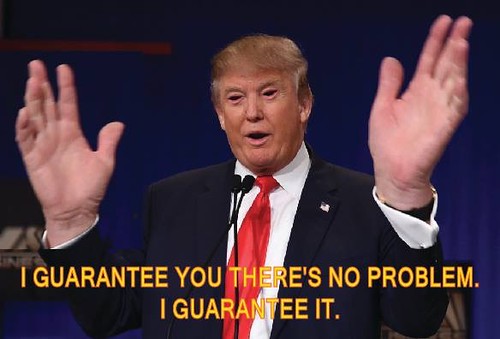 It tells you all you need to know about Trump's mind and how it works (and doesn't). Just recall how "We have nothing to fear but fear itself," told the nation volumes about Franklin Delano Roosevelt, and how his mind worked. In his five words Trump described his state of mind about what he thinks the pandemic is, and what he can --- and cannot --- do about it. He then went further, with two of the standard lines that have carried him through the countless obstacles he has faced during the course of his life and business, entertainment, and political careers.

First, "it's not my fault." That is, with classic Trump blame-shifting, "it's the fault of the Chinese Communist Party which unleashed the 'Chinese Flu' upon us." (Trump, of course, for the Trumpidemic2020Â© brings up this excuse up all the time. I have not yet heard an interviewer, not even Jonathan Swan, point out that those European and Asian countries that have so well faced down the same situation --- that is that the SARS-CoV2 virus apparently emanated from the Chinese city of Wuhan. So, it could not have been the "Chinese" who created the out-of-control problem here. For if it were "their fault," then all other countries should be in the same boat.)

And then next comes "it's not my responsibility: it's the Governors." Classic blame-shifting Trump again. That he has followed that policy is of course is precisely the problem. It is precisely the opposite of what all those countries that have done so much better than the U.S. have done: set up a national program. Starting with the creation of an effective, fast, testing program (with contact tracing and isolation), they did not leave it up to provincial authorities. This is because the virus does not recognize provincial/State boundaries.

Of course, Crew Kushner thought it would when they indeed did develop a testing program that had promise, but then withheld it because they thought that the pandemic would be limited to the "Blue" states and they didn't want to help them out (even though, of course, Republicans live in those states too[!]). We won't go into the ethics and morality of that one here. But we will say that it turned out to be politically stupid for them since the virus does in fact easily cross state lines. But that's another story.

Now, one interpretation, offered by a prominent expert on infectious disease, of what happened is that "America [emphasis added] has failed to protect its people, leaving them with illness and financial ruin." But, it is not "America" that has failed. It is its President who has failed it. (The author of the very long column cited above does finally get to the correct conclusion. But it does take him a VERY long time in a very lengthy column to get there.) It was not the United States, or "the American people" that was defeated by COVID-19. It was the Trump Administration that gave way from the start on the battlefield and led the nation to the situation that our nation now faces.

As pointed out above, the straightforward public health package of measures necessary to bring this highly infectious agent under control was marshaled in most of the European countries as well as a number of Asian ones, including China, South Korea, Taiwan, Viet Nam, and Japan (although, as an island nation, its task was simpler than that of most). To repeat, the pandemic was not "caused by China and its duplicity" (as claimed in the cited article). As pointed out earlier, if that were the case, none of the above nations would have achieved the success they did. Trump could have brought the problem under control in March, even after Trumpannity spent all of February claiming that the pandemic was not real but a hoax invented by the Democrats in order to steal the election from Trump. (See: https://www\. opednews.com/articles/An-Ounce-of-Prevention---by-Steven-Jonas-China_Covid-19_Republican_Trump-200317-923.html.)

To say that "The U.S. failed" is a falsity that plays right into Trump myth-making that somehow it's "everyone's fault." It ain't. It's his. And I have published a series of columns on why and how this totally ignorant man, who for starters doesn't have the foggiest notion of what a virus is, using the Magical Thinking that has guided him through the whole of his life, has led us into this total calamity. (His Magical Thinking is why he is so enamored of the idea of a vaccine --- it's a magic bullet.) By doing what he did and not doing what he didn't do, Trump IS solely responsible for this disaster, starting with the dismantlement of the former White House pandemic-preparedness office, primarily because it was an Obama creation. Of course, he had/has his enablers/supporters/cheerleaders (see the next paragraph). But if he had said "do it the public health way," then that is what would have been done. There are NO excuses for this man and the monstrous crime he has committed. Let us not give him any.

As for the enablers, they are to be found in that wing of the U.S. ruling class in which his support is found, e.g. the fossil fuel industry, finance/banking/investment, BIG Ag., major sectors of the "social media," major sectors of "high tech," Fox"News" and its relatives, and so on and so forth. What do they like? The "Deconstruction of the Administrative State," the targeted tax cuts, and "the Judges" (which movement is populating the courts with business-favorable judges who also happen to be inclined towards religious authoritarianism, which brings along the Religious Right). (And of course, the Congressional and state Repubs. are right in their pockets as well, literally.) As we move towards the 2020 election the authoritarian sector of the ruling class wishes that they would have as leader a man who is much smarter and didn't have all the personality-problems/mental-issues which his niece has described in detail in her book. But they do. And that's their problem.

In the meantime, our problem is Trump and the Trumpidemic2020Â©. Saying that it's "the American people" does not deal with the problem. And saying that Biden has too many flaws doesn't deal with the problem either. We need to say "sayonara" to Trump (that is if he doesn't decide to up and get out of the country while he still can). Then we can begin organizing to push Biden and the (hopefully completely) Democratic Congress in the directions we want them to go.

As if to confirm my conclusion that Trump is consumed with Magical Thinking, this afternoon (Aug. 6, 2020) he said that a corona virus vaccine could be available before Nov. 3. While this is scientifically unlikely, hey, you never know. What is fascinating, and increasingly deadly for the nation, is that Trump can focus on a rush (likely rushed) development of a vaccine and the planning and implementation that the project requires, but cannot focus on the much (scientifically) simpler task of developing a national plan for: testing, contact tracing and isolation; properly equipping hospitals and their staffs; assuring the wide-spread wearing of masks; the wide-spread adoption of social distancing, everywhere; returning to school and work safely, and etc. To do so would entail first, a knowledge and understanding of viral disease and second, the recognition that it will not magically go away. Trump of course has neither.

Steven Jonas, MD, MPH, MS is a Professor Emeritus of Preventive Medicine at StonyBrookMedicine (NY) and author/co-author/editor/co-editor of over 35 books. In addition to his position on OpEdNews as a â€œTrusted Author,â€ he is a Senior (more...)
Related Topic(s): America; Authoritarianism; China; Election; Governors; Health; Health; Hoax; Magic; Pandemic; (more...) State; Thinking; Truth, Add Tags  (less...)
Add to My Group(s)
Go To Commenting
The views expressed herein are the sole responsibility of the author and do not necessarily reflect those of this website or its editors.