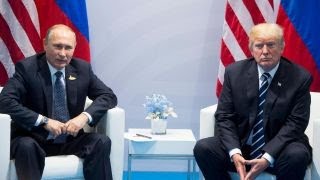 After today's obscene taxpayer-funded Helsinki debacle there can be no doubt that Donald Trump is a Russian asset. Whether he is conscious of that fact will likely be revealed in coming weeks, but regardless, he is acting against his Constitutional duty to protect our nation from a foreign enemy who has attacked us.

What the hell more do you need? Do we have to wait until Putin marches troops into Seattle before we take action? Russian hacking and cyber attacks were as real an attack on our nation as the attack on Pearl Harbor. Putin now has everything he ever wanted thanks to this orange con artist. He sowed doubt in our most sacred institutions -- our system of justice, our national defense, our electoral process -- and he has the US President calling the European Union our "foe" and insulting our NATO allies.

And God only knows what they talked about in their latest secret 2+ hour private chat. They came out spouting identical talking points so they had enough time to rehearse -- that was clear. With that Dominant/Submissive body language and Trump's effusive praise and subservient head nodding, Putin might as well been shirtless and wielding a riding crop. Trump is his b*tch all right. Best spanking since Stormy Daniels.

Had this been Obama, the Republicans would have had him in front of a firing squad as soon as Air Force-1 touched the tarmac. Literally. But we get mealy weasel words from McConnell and Ryan, our elected leaders in Congress. Disgraceful and possibly criminal negligence of their own Constitutional oaths. Maybe Putin has crap on them, too.

If they took Russian-laundered money from the NRA there might be more than one impeachment before this is over.

At least Putin finally put to rest Trump's insane position that Putin wanted Hillary to win and any efforts in hacking or meddling were done in her favor. Millions of votes stolen from him, remember that rabbit hole he sent Congress down with your money? There hasn't been a more dangerously narcissistic a**hole since Nero. But I digress ...

Why would Putin want Hillary? Look at recent history -- in 2015 Putin entered the Syrian civil war to help Assad commit war crimes against his own people. But why stop there? Russian killers then attacked a US military base to force our troops out. Putin knew a President HRC would deal with this harshly, along with his Ukraine invasion/Malaysian airplane missile strike, Crimea annexation, and penchant for poisoning journalists, politicians, and other enemies. Among other atrocities. Of course Vlad wanted Trump over Hillary. Even Putin smirked as he admitted it today, like it was ever in doubt.

But Putin the Poisoner told US State media that he had nothing to do with any of those mysterious deaths. So that's settled. And he said it both strongly and forcefully, so you know it's true. This is so perverse and disgusting it's hard to explain to our teenage daughter how this treasonous criminal is sleeping in the White House tonight. There is no comparison in US history, no analogy to describe this.

We were "Finlandized" today by our own President. What will the Republicans in power do to protect us from further attacks, both foreign and domestic?

Kathy never expected a career in radio as a talk show producer. Born and raised in Atlanta, Georgia, Kathy was completing her nursing degree when in 2001 - in an emergency - she was asked to fill in as the producer of Mike's program. Within a few (more...)
Related Topic(s): Donald Trump; Treason; Trump Putin Summit; Vladimir Putin, Add Tags
Add to My Group(s)
Go To Commenting
The views expressed herein are the sole responsibility of the author and do not necessarily reflect those of this website or its editors.