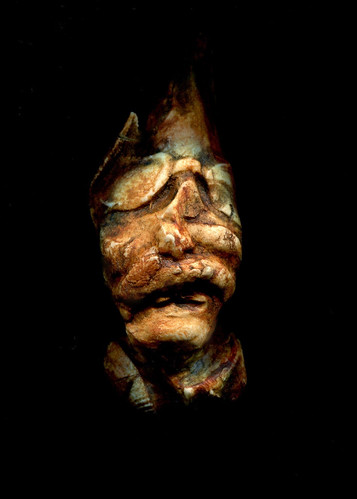 John Bolton without his mask.
(Image by TheoJunior)   Details   DMCA

His appointment was a genuine Bolton from the blue (so to speak). After all, everyone knew that former U.N. Ambassador (and Fox News commentator) John Bolton couldn't be chosen for a major post in the Trump administration. No, not because of his outlandish views on war-making, or his responsibility for helping launch an invasion of Iraq that would result in possibly a million deaths over these last 14 years, or the uprooting of millions more, or the destruction of some of Iraq's great cities, or the unsettling of vast regions of the Middle East, or the spread of outlandish terror groups, or even his yet more outlandish insistence that such an invasion was the right thing to do, or because, as TomDispatchregular U.S. Army Major Danny Sjursen reports today, he's likely to do it all over again in Iran (or elsewhere), but because of his mustache. Donald Trump reportedly rejected Bolton back in 2016 as a possible secretary of state because he simply didn't look the part. He didn't seem to the president-elect like someone who came from central casting, as did say Marine Corps General James ("Mad Dog") Mattis. And it was assumed that Trump would pass over Bolton again when it came to replacing Lieutenant General H.R. McMaster, his national security adviser.

But it turns out that President Trump, in his latest you're-fired mood, has proven far more open-minded than the reporters and pundits following him expected. As long as the chosen one is a Fox News commentator or anchor (like his new economic adviser Larry Kudlow), central casting turns out to approve, mustache or no. Everybody, it seems, can be a celebrity apprentice in this administration, as long as Fox News is involved. War or peace are neither here nor there, not when the friends of Fox are involved. Tom

Sometimes I get sick of saying it, but just when you thought it couldn't get any worse"

Donald Trump's continual cabinet reshuffling -- otherwise the stuff of reality-TV drama -- has become genuinely frightening. Like so many Russian matryoshki or nesting dolls, the president has been removing one war hawk after another, only to reveal yet more extreme versions of the same creature. And rumor has it that such personnel moves have yet to reach their end point.

In just the last few weeks, President Trump has fired his secretary of state and national security adviser, while nominating two fanatical replacements: CIA Director Mike Pompeo and former U.N. Ambassador John Bolton. The "old" team, Rex Tillerson and Lieutenant General H.R. McMaster, were flawed choices from the start, but Pompeo and Bolton seem like an instant formula for a war -- or two or three of them. (And keep in mind that we're already actively fighting at least seven wars across the Greater Middle East and Africa.)

Tillerson gutted the State Department and, had he stuck around, might have gone down as one of the worst secretaries of state ever to walk the halls of Foggy Bottom. Still, the former ExxonMobil CEO does seem to have tried to restrain Trump's more extreme positions on the Paris climate accords and the Obama-era Iran nuclear deal. In addition, as his infamous "moron" comment suggests, he evidently wasn't cowed by our bully-in-chief.

Lieutenant General McMaster was no prince either. He helped craft a National Defense Strategy that all but declared a new Cold War on Russia and China. He was also to the right of reasonable on Iran and North Korea. Nevertheless, he is an intelligent man with genuine academic bona fides. I've met the guy and, even though we disagree on almost everything, he's certainly preferable to a zealot like Bolton. McMaster thinks critically and wasn't always reflexively pro-war. However, Trump, a man who likes his information in tiny doses (and preferably on Fox News), reportedly found H.R.'s detailed briefings insufferable. And McMaster's recent suggestion that Russia played an "incontrovertible" role in the 2016 U.S. election evidently didn't help him one bit either.

Think about it for a second. An embattled, scandal-ridden administration suddenly fires two hawkish, though tenuously mainstream, foreign policy advisers and replaces them with off-the-grid warmongers. Connect those dots and it gets scary, fast. In fact, the situation is starting to resemble a Hollywood-style, Wag-the-Dog, drum-up-a-war-to-distract-the-populace scenario.

With whom? Given the proclivities of Pompeo and Bolton, the obvious candidate is Iran. After all, as their records suggest, both the incoming secretary of state and the national security adviser suffer from acute cases of Iran hysteria and have been beating the Islamic Republic war drum for years now. So look for Trump and his two new subordinates to strike a less than substantial deal with nuclear North Korea (to show their cuddly diplomatic side) and then pivot toward tearing up the Iran nuclear deal in May and heading for military action against non-nuclear -- and so more vulnerable -- nuclear-pact-adhering Iran.

Count on this, at least: it's going to be one hell of a ride for America's already overstretched military men and women -- and one hell of a cash bonanza for an already flush military-industrial complex.

No question about it: John Bolton is a nightmare. If he worked for Iran or any other Muslim state, we'd label him a fundamentalist extremist. But he's ours and his religion of choice has long been chauvinist interventionism, so instead he tends to get the lifeless (and perhaps not even accurate) label "neoconservative."

How bad is he? Well, we'd all undoubtedly be far better served if Michael Bolton were national security adviser and just sang "How Am I Supposed to Live Without You" throughout his term in office.

Related Topic(s): Donald Trump; Military; Wars, Add Tags
Add to My Group(s)
Go To Commenting
The views expressed herein are the sole responsibility of the author and do not necessarily reflect those of this website or its editors.